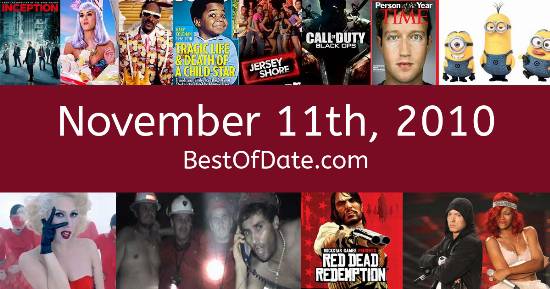 Songs that were on top of the music singles charts in the USA and the United Kingdom on November 11th, 2010.

The date is November 11th, 2010 and it's a Thursday. Anyone born today will have the star sign Scorpio. It's November, so the evenings are getting darker and the days are getting colder.

In America, the song Like A G6 by Far East Movement is on top of the singles charts. Over in the UK, Only Girl by Rihanna is the number one hit song. Barack Obama is currently the President of the United States and the movie Saw 3D is at the top of the Box Office.

Pre-made comics called "Rage Comics" are extremely popular on the Internet at the moment, as people use them to share relatable experiences. A new post-apocalyptic zombie TV series called "The Walking Dead" has just debuted on AMC. Rap star Lil Wayne has been released from prison following his conviction of attempted criminal possession of a weapon.

Children and teenagers are currently watching television shows such as "Hannah Montana", "Mickey Mouse Clubhouse", "Curious George" and "Glee". Popular toys at the moment include the likes of the Xbox 360, the PlayStation 3, ZhuZhu Pets and the iPad.

Celebrities, historical figures and notable people who were born on the 11th of November.

Barack Obama was the President of the United States on November 11th, 2010.

David Cameron was the Prime Minister of the United Kingdom on November 11th, 2010.

Enter your date of birth below to find out how old you were on November 11th, 2010.

Here are some fun statistics about November 11th, 2010.

Leave a comment and tell everyone why November 11th, 2010 is important to you.