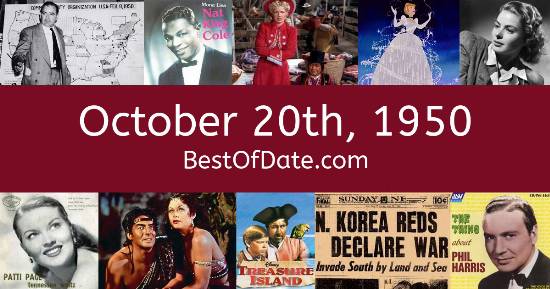 The best-selling single on October 20th, 1950 was "Goodnight Irene" by Gordon Jenkins.

The date is October 20th, 1950, and it's a Friday. Anyone born today will have the star sign Libra. Currently, people have "that Friday feeling" and are looking forward to the weekend.

The summer is long gone. Temperatures have started to become much cooler and the evenings are beginning to get darker. Fallen leaves have carpeted driveways, lawns, pathways and sidewalks and there's a fresh earthy scent in the ear. Halloween of 1950 is quickly approaching.

In music, the song "Goodnight Irene" by Gordon Jenkins is the best-selling record at the moment. Harry S. Truman is currently the President of the United States, and Clement Attlee is the Prime Minister of the United Kingdom. In fashion, women are sporting the popular "The New Look" by Christian Dior. This formal style includes rounded shoulders, a full-skirted silhouette and a tight waist. Meanwhile, men are beginning to follow a new "Teddy Boy" trend that involves greased-back hair, extremely narrow trousers and velvet-collared jackets.

It's 1950, so radio stations and jukeboxes are playing songs from artists such as Nat King Cole, Gordon Jenkins & The Weavers, Anton Karas, Gary & Bing Crosby, Teresa Brewer, Guy Lombardo and Red Foley. In Asia, the Korean War is raging on between South Korea and North Korea. On TV, people are watching popular shows such as "The Lone Ranger", "The Colgate Comedy Hour", "You Bet Your Life" and "The George Burns and Gracie Allen Show".

Children and teenagers are currently watching television shows such as "Looney Tunes", "Jim and Judy in Teleland", "Crusader Rabbit" and "Telecomics". If you're a kid or a teenager, then you're probably playing with toys such as Tonka trucks, Foto-Electric Baseball, Toy Guns and Spinning Tops.

These are trending news stories and fads that were prevalent at this time. These are topics that would have been in the media on October 20th, 1950.

Check out our personality summary for people who were born on October 20th, 1950.

Television shows that people were watching in October, 1950.

If you are looking for some childhood nostalgia, then you should check out October 20th, 1956 instead.

Wrestler. Deceased
Born on October 20th, 1958
He was born exactly 8 years after this date.

US Vice President.
Born on October 20th, 1964
She was born exactly 14 years after this date.

Harry S. Truman was the President of the United States on October 20th, 1950.

Enter your date of birth below to find out how old you were on October 20th, 1950.
This information is not transmitted to our server.

Here are some fun statistics about October 20th, 1950.