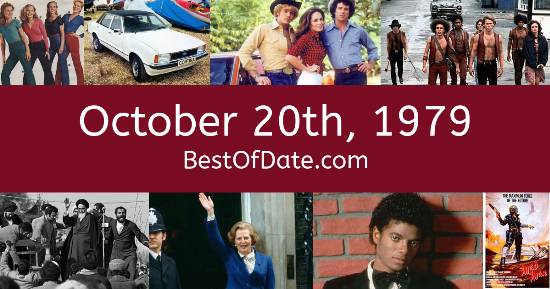 These songs were on top of the music charts in the United States and the United Kingdom on October 20th, 1979.

The top "Box Office" movie on this date was the film "When a Stranger Calls".

The date is October 20th, 1979, and it's a Saturday. Anyone born today will have the star sign Libra. Currently, people are enjoying their weekend.

The summer is long gone. Temperatures have started to become much cooler and the evenings are beginning to get darker. Fallen leaves have carpeted driveways, lawns, pathways and sidewalks and there's a fresh earthy scent in the ear. Halloween of 1979 is quickly approaching.

In America, the song Rise by Herb Alpert is on top of the singles charts. Over in the UK, Video Killed The Radio Star by Buggles is the number one hit song. Jimmy Carter is currently the President of the United States, and the movie When a Stranger Calls is at the top of the Box Office.

If you were to travel back to this day, notable figures such as Alfred Hitchcock, Ian Curtis, Dorothy Stratten and Steve McQueen would all be still alive. On TV, people are watching popular shows such as "Charlie's Angels", "The Incredible Hulk", "Taxi" and "Hart to Hart". Meanwhile, gamers are playing titles such as "Gun Fight", "Breakout", "Space Invaders" and "Lunar Lander".

Kids and teenagers are watching TV shows such as "The Pink Panther Show", "Fat Albert and the Cosby Kids", "Captain Caveman and the Teen Angels" and "Casper and the Angels". If you're a kid or a teenager, then you're probably playing with toys such as Troll doll, the Easy-Bake Oven, Magna Doodle and Water Ring Toss.

These are trending news stories and fads that were prevalent at this time. These are topics that would have been in the media on October 20th, 1979.

Check out our personality summary for people who were born on October 20th, 1979.

If you are looking for some childhood nostalgia, then you should check out October 20th, 1985, instead.

Celebrities, historical figures, and other notable people who were born on October 20th.

Jimmy Carter was the President of the United States on October 20th, 1979.

Enter your date of birth below to find out how old you were on October 20th, 1979.
This information is not transmitted to our server.

Here are some fun statistics about October 20th, 1979.