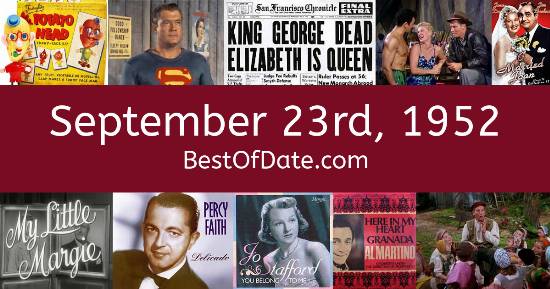 The best-selling single on September 23rd, 1952 was "You Belong to Me" by Jo Stafford.

The date is September 23rd, 1952, and it's a Tuesday. Anyone born today will have the star sign Libra. Schools and colleges are starting again and Autumn has officially arrived. As a result, temperatures are beginning to cool and trees are starting to shed their leaves.

The earthy smells of fall have started to fill the air. In music, the song "You Belong to Me" by Jo Stafford is the best-selling record at the moment. Harry S. Truman is currently the President of the United States, and Winston Churchill is the Prime Minister of the United Kingdom.

If you were to travel back to this day, notable figures such as Hank Williams would be still alive. On TV, people are watching popular shows such as "The Lone Ranger", "The Cisco Kid", "I Love Lucy" and "The Roy Rogers Show". Kids and teenagers are watching TV shows such as "Looney Tunes", "Tom and Jerry", "Crusader Rabbit" and "Adventures of Superman".

If you're a kid or a teenager, then you're probably playing with toys such as Dimestore soldiers, Tonka trucks, BAS-KET Miniature Basketball and Butch the Pup Toy.

These are trending news stories and fads that were prevalent at this time. These are topics that would have been in the media on September 23rd, 1952.

News stories and other events that happened around September 23rd, 1952.

Check out our personality summary for people who were born on September 23rd, 1952.

If you are looking for some childhood nostalgia, then you should check out September 23rd, 1958 instead.

Record producer.
Born on September 23rd, 1972
He was born exactly 20 years after this date.

Television personality.
Born on September 23rd, 1972
He was born exactly 20 years after this date.

Harry S. Truman was the President of the United States on September 23rd, 1952.

Winston Churchill was the Prime Minister of the United Kingdom on September 23rd, 1952.

Find out what your age was on September 23rd, 1952, by entering your DOB below.
This information is not saved on our server.

Here are some fun statistics about September 23rd, 1952.