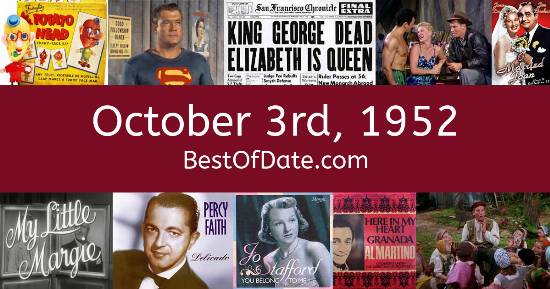 The best-selling single on October 3rd, 1952 was "You Belong to Me" by Jo Stafford.

The date is October 3rd, 1952 and it's a Friday. Anyone born today will have the star sign Libra. Currently, people have "that Friday feeling" and are looking forward to the weekend.

The summer is long gone. Temperatures have started to become much cooler and the evenings are beginning to get darker. Fallen leaves have carpeted driveways, lawns, pathways and sidewalks and there's a fresh earthy scent in the ear. In music, the song "You Belong to Me" by Jo Stafford is the best-selling record at the moment.

Because it's 1952, radio stations and jukeboxes are playing songs from singers such as Leroy Anderson, Kay Starr, Johnnie Ray & The Four Lads, Jo Stafford, Vera Lynn, Al Martino, Rosemary Clooney, Eddie Fisher and Patti Page. If you were to travel back to this day, notable figures such as Hank Williams would be still alive. On TV, people are watching popular shows such as "The Ed Sullivan Show", "Space Patrol", "The George Burns and Gracie Allen Show" and "Sky King".

Kids and teenagers are watching TV shows such as "Looney Tunes", "Tom and Jerry", "Crusader Rabbit" and "Adventures of Superman". Popular toys at the moment include the likes of Foto-Electric Baseball, Tiny Tears (doll), Pitchin' Pal and Feed the Elephant.

If you are looking for some childhood nostalgia, then check out October 3rd, 1958 instead.

Musician. Deceased
Born on October 3rd, 1954
He was born exactly 2 years after this date.

Activist.
Born on October 3rd, 1954
He was born exactly 2 years after this date.

Drummer.
Born on October 3rd, 1962
He was born exactly 10 years after this date.

Singer.
Born on October 3rd, 1969
She was born exactly 17 years after this date.

Actress.
Born on October 3rd, 1973
She was born exactly 21 years after this date.

Singer.
Born on October 3rd, 1975
She was born exactly 23 years after this date.

Soccer player.
Born on October 3rd, 1981
He was born exactly 29 years after this date.

Singer.
Born on October 3rd, 1984
She was born exactly 32 years after this date.

Harry S. Truman was the President of the United States on October 3rd, 1952.

Winston Churchill was the Prime Minister of the United Kingdom on October 3rd, 1952.

Enter your date of birth below to find out how old you were on October 3rd, 1952.

Here are some fun statistics about October 3rd, 1952.