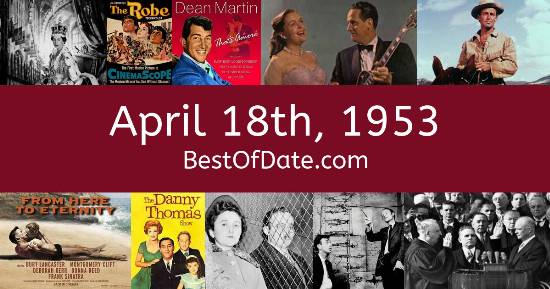 The best-selling single on April 18th, 1953 was "The Doggie in the Window" by Patti Page.

The date is April 18th, 1953 and it's a Saturday. Anyone born today will have the star sign Aries. Currently, people are enjoying their weekend.

The summer of 1953 is drawing closer and temperatures have started to rise. In music, the song "The Doggie in the Window" by Patti Page is the best-selling record at the moment. Dwight David Eisenhower is currently the President of the United States and Winston Churchill is the Prime Minister of the United Kingdom.

On TV, people are watching popular shows such as "What's My Line?", "You Bet Your Life", "The Jack Benny Program" and "Sky King". Kids and teenagers are watching TV shows such as "Looney Tunes", "Tom and Jerry", "Crusader Rabbit" and "Adventures of Superman". If you're a kid or a teenager, then you're probably playing with toys such as Tonka trucks, Foto-Electric Baseball, Colorforms and Feed the Elephant.

If you are looking for some childhood nostalgia, then check out April 18th, 1959 instead.

American talk show host.
Born on April 18th, 1963
He was born exactly 10 years after this date.

American actress.
Born on April 18th, 1976
She was born exactly 23 years after this date.

Media personality.
Born on April 18th, 1979
She was born exactly 26 years after this date.

White House press secretary.
Born on April 18th, 1988
She was born exactly 35 years after this date.

Dwight David Eisenhower was the President of the United States on April 18th, 1953.

Winston Churchill was the Prime Minister of the United Kingdom on April 18th, 1953.

Enter your date of birth below to find out how old you were on April 18th, 1953.