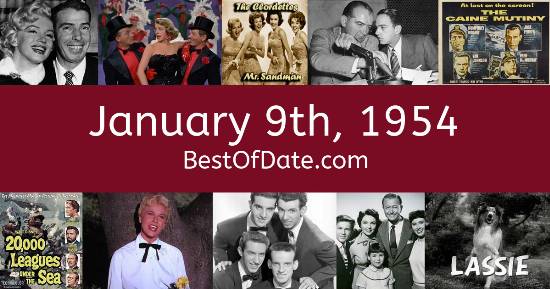 The date is January 9th, 1954 and it's a Saturday. Anyone born today will have the star sign Capricorn. Currently, people are enjoying their weekend.

The Christmas holiday season is long over, the decorations have been taken down and a sense of normality has returned. In music, the song "Oh! My PaPa (O Mein Papa)" by Eddie Fisher is the best-selling record at the moment. Dwight David Eisenhower is currently the President of the United States and Winston Churchill is the Prime Minister of the United Kingdom.

On TV, people are watching popular shows such as "What's My Line?", "The Cisco Kid", "The Colgate Comedy Hour" and "Life with Elizabeth". Kids and teenagers are watching TV shows such as "Looney Tunes", "Tom and Jerry", "Crusader Rabbit" and "Winky Dink and You". Popular toys at the moment include the likes of Tonka trucks, Tiny Tears (doll), Butch the Pup Toy and Matchbox toy cars.

If you are looking for some childhood nostalgia, then check out January 9th, 1960 instead.

Canadian actress.
Born on January 9th, 1989
She was born exactly 35 years after this date.

Dwight David Eisenhower was the President of the United States on January 9th, 1954.

Winston Churchill was the Prime Minister of the United Kingdom on January 9th, 1954.

Enter your date of birth below to find out how old you were on January 9th, 1954.

Here are some fun statistics about January 9th, 1954.