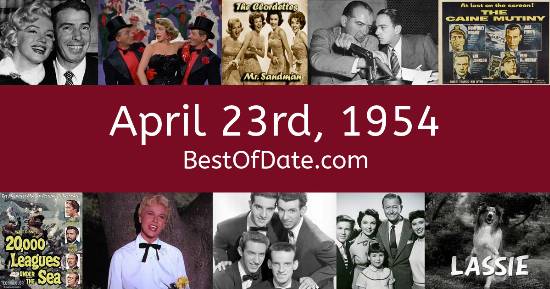 The date is April 23rd, 1954 and it's a Friday. Anyone born today will have the star sign Taurus. Currently, people have "that Friday feeling" and are looking forward to the weekend.

The summer of 1954 is drawing closer and temperatures have started to rise. In music, the song "Wanted" by Perry Como is the best-selling record at the moment. Dwight David Eisenhower is currently the President of the United States and Winston Churchill is the Prime Minister of the United Kingdom.

On TV, people are watching popular shows such as "Space Patrol", "The Colgate Comedy Hour", "My Little Margie" and "Our Miss Brooks". Children and teenagers are currently watching television shows such as "Looney Tunes", "Tom and Jerry", "Crusader Rabbit" and "Adventures of Superman". Popular toys at the moment include the likes of Tonka trucks, Foto-Electric Baseball, Spinning Tops and Mr. Potato Head.

If you are looking for some childhood nostalgia, then check out April 23rd, 1960 instead.

American terrorist. Deceased
Born on April 23rd, 1968
He was born exactly 14 years after this date.

Dwight David Eisenhower was the President of the United States on April 23rd, 1954.

Winston Churchill was the Prime Minister of the United Kingdom on April 23rd, 1954.

Enter your date of birth below to find out how old you were on April 23rd, 1954.