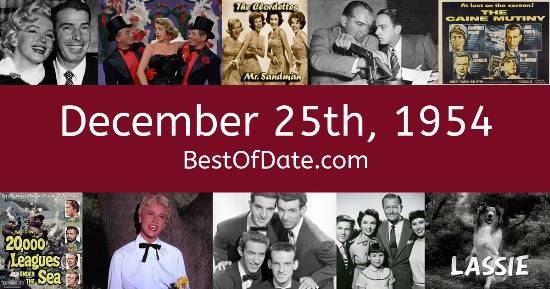 The best-selling single on December 25th, 1954 was "Mr. Sandman" by The Chordettes.

The date is December 25th, 1954, and it's a Saturday. Anyone born today will have the star sign Capricorn. Currently, people are enjoying their weekend.

It's Christmas Day of 1954, so most people are exchanging presents and spending time at home with their families. In music, the song "Mr. Sandman" by The Chordettes is the best-selling record at the moment. Dwight David Eisenhower is currently the President of the United States, and Winston Churchill is the Prime Minister of the United Kingdom.

On TV, people are watching popular shows such as "The Lone Ranger", "What's My Line?", "I Love Lucy" and "Life with Elizabeth". Kids and teenagers are watching TV shows such as "Looney Tunes", "Crusader Rabbit", "Winky Dink and You" and "Lassie". If you're a kid or a teenager, then you're probably playing with toys such as Dimestore soldiers, Tonka trucks, Spinning Tops and Pitchin' Pal.

These are trending news stories and fads that were prevalent at this time. These are topics that would have been in the media on December 25th, 1954.

News stories, pop culture trends, and other events that happened around December 25th, 1954.

Check out our personality summary for people who were born on December 25th, 1954.

If you are looking for some childhood nostalgia, then you should check out December 25th, 1960, instead.

Celebrities, historical figures, and other notable people who were born on December 25th.

Singer.
Born on December 25th, 1957
He was born exactly 3 years after this date.

Canadian Prime Minister.
Born on December 25th, 1971
He was born exactly 17 years after this date.

Dwight David Eisenhower was the President of the United States on December 25th, 1954.

Find out what your age was on December 25th, 1954, by entering your DOB below.
This information is not saved on our server.

Here are some fun statistics about December 25th, 1954.