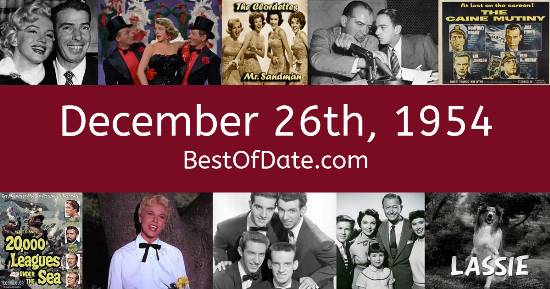 The best-selling single on December 26th, 1954 was "Mr. Sandman" by The Chordettes.

The date is December 26th, 1954, and it's a Sunday. Anyone born today will have the star sign Capricorn. Currently, people are enjoying their weekend.

Christmas Day of 1954 has just passed and many people are relaxing at home and enjoying the holiday season. In music, the song "Mr. Sandman" by The Chordettes is the best-selling record at the moment. Dwight David Eisenhower is currently the President of the United States, and Winston Churchill is the Prime Minister of the United Kingdom.

On TV, people are watching popular shows such as "What's My Line?", "The Cisco Kid", "The Roy Rogers Show" and "Annie Oakley". Children and teenagers are currently watching television shows such as "Tom and Jerry", "Crusader Rabbit", "Adventures of Superman" and "Father Knows Best". If you're a kid or a teenager, then you're probably playing with toys such as Tonka trucks, BAS-KET Miniature Basketball, Mr. Potato Head and Matchbox toy cars.

These are trending news stories and fads that were prevalent at this time. These are topics that would have been in the media on December 26th, 1954.

Check out our personality summary for people who were born on December 26th, 1954.

If you are looking for some childhood nostalgia, then you should check out December 26th, 1960 instead.

Drummer.
Born on December 26th, 1963
He was born exactly 9 years after this date.

Soccer player.
Born on December 26th, 1990
He was born exactly 36 years after this date.

TikTok personality. Deceased
Born on December 26th, 2002
He was born exactly 48 years after this date.

Dwight David Eisenhower was the President of the United States on December 26th, 1954.

Winston Churchill was the Prime Minister of the United Kingdom on December 26th, 1954.

Enter your date of birth below to find out how old you were on December 26th, 1954.
This information is not transmitted to our server.

Here are some fun statistics about December 26th, 1954.