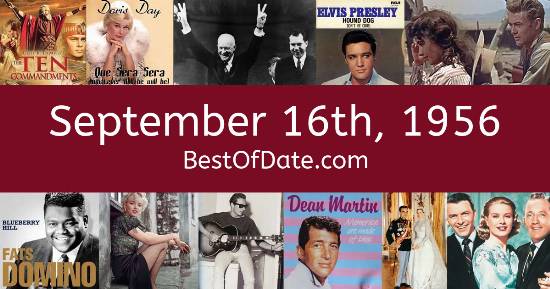 The best-selling single on September 16th, 1956 was "Hound Dog" by Elvis Presley.

The date is September 16th, 1956, and it's a Sunday. Anyone born today will have the star sign Virgo. Currently, people are enjoying their weekend.

Schools and colleges are starting again and Autumn has officially arrived. As a result, temperatures are beginning to cool and trees are starting to shed their leaves. The earthy smells of fall have started to fill the air. In music, the song "Hound Dog" by Elvis Presley is the best-selling record at the moment.

Dwight David Eisenhower is currently the President of the United States, and Sir Anthony Eden is the Prime Minister of the United Kingdom. In fashion, women are sporting chemise dresses, sheaths, sack dresses and straight-cut suits. Short boxy jackets and shift dresses are also beginning to become popular. Meanwhile, a lot of men are sporting a "Teddy Boy" style that involves leather jackets, greased-back hair, extremely narrow trousers and velvet-collared jackets. Men are also wearing formal suits as daywear. Tailfins on cars are extremely popular at the moment. The design looks futuristic, almost like a rocket or the twin rudders on the back of an airplane.

It's 1956, so radio stations and jukeboxes are playing songs from singers such as Elvis Presley, Nelson Riddle, The Platters, Gogi Grant, Les Baxter, Doris Day, Dean Martin and Kay Starr. If you were to travel back to this day, notable figures such as Humphrey Bogart would be still alive. On TV, people are watching popular shows such as "What's My Line?", "Sky King", "Gunsmoke" and "Fury".

Children and teenagers are currently watching television shows such as "Looney Tunes", "Tom and Jerry", "Captain Kangaroo" and "The Gumby Show". If you're a kid or a teenager, then you're probably playing with toys such as BAS-KET Miniature Basketball, Mr. Potato Head, Roy Rogers Plastic Figures and Matchbox toy cars.

These are trending news stories and fads that were prevalent at this time. These are topics that would have been in the media on September 16th, 1956.

Check out our personality summary for people who were born on September 16th, 1956.

Television shows that people were watching in September, 1956.

If you are looking for some childhood nostalgia, then you should check out September 16th, 1962 instead.

Internet personality.
Born on September 16th, 1993
He was born exactly 37 years after this date.

Dwight David Eisenhower was the President of the United States on September 16th, 1956.

Enter your date of birth below to find out how old you were on September 16th, 1956.
This information is not transmitted to our server.

Here are some fun statistics about September 16th, 1956.