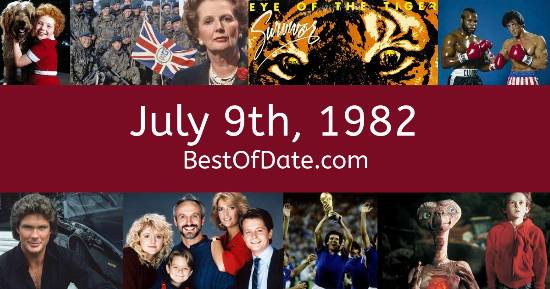 Songs that were on top of the music singles charts in the USA and the United Kingdom on July 9th, 1982.

The date is July 9th, 1982 and it's a Friday. Anyone born today will have the star sign Cancer. Currently, people have "that Friday feeling" and are looking forward to the weekend.

It's summer, so the temperatures are warmer and the evenings are longer than usual. In America, the song Don't You Want Me by Human League is on top of the singles charts. Over in the UK, Happy Talk by Captain Sensible is the number one hit song.

Because it's 1982, the radio stations are being dominated by artists such as Survivor, Men at Work, Joan Jett & The Blackhearts, Dexys Midnight Runners, Paul McCartney and Stevie Wonder. In Spain, the 1982 FIFA World Cup is currently taking place. On TV, people are watching popular shows such as "Last of the Summer Wine", "Little House on the Prairie", "Laverne & Shirley" and "Spider-Man and His Amazing Friends".

Meanwhile, gamers are playing titles such as "Asteroids", "Galaxian", "Pac-Man" and "Missile Command". Kids and teenagers are watching TV shows such as "Captain Kangaroo", "Happy Days", "The Smurfs" and "Danger Mouse". If you're a kid or a teenager, then you're probably playing with toys such as Hungry Hungry Hippos, Water Ring Toss, Rubik's Cube and Monchhichi / Chicaboo.

If you are looking for some childhood nostalgia, then check out July 9th, 1988 instead.

Ronald Reagan was the President of the United States on July 9th, 1982.

Margaret Thatcher was the Prime Minister of the United Kingdom on July 9th, 1982.

Enter your date of birth below to find out how old you were on July 9th, 1982.

Here are some fun statistics about July 9th, 1982.