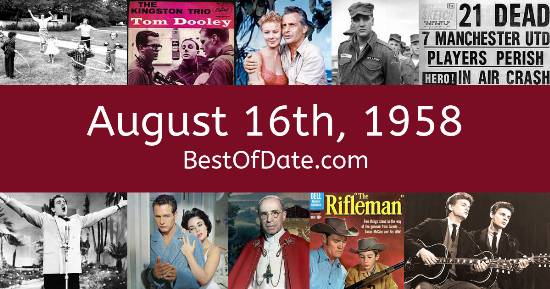 The date is August 16th, 1958 and it's a Saturday. Anyone born today will have the star sign Leo. Currently, people are enjoying their weekend.

It's summer, so the temperatures are warmer and the evenings are longer than usual. In music, the song "Poor Little Fool" by Ricky Nelson is the best-selling record at the moment. Dwight David Eisenhower is currently the President of the United States and Harold Macmillan is the Prime Minister of the United Kingdom.

A new plastic toy called the "Hula Hoop" has become the latest fad. The hoop, which can be twirled around your waist and limbs, has exploded in popularity since July. On TV, people are watching popular shows such as "The Ed Sullivan Show", "You Bet Your Life", "The Danny Thomas Show" and "Have Gun - Will Travel". Kids and teenagers are watching TV shows such as "Looney Tunes", "Captain Kangaroo", "Mighty Mouse Playhouse" and "Heckle and Jeckle".

Who was the Prime Minister of the United Kingdom on August 16th, 1958?

Enter your date of birth below to find out how old you were on August 16th, 1958.

Looking for some nostalgia? Here are some Youtube videos relating to August 16th, 1958. Please note that videos are automatically selected by Youtube and that results may vary! Click on the "Load Next Video" button to view the next video in the search playlist. In many cases, you'll find episodes of old TV shows, documentaries, music videos and soap dramas.