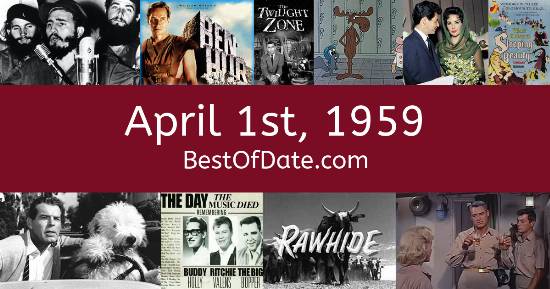 The best-selling single on April 1st, 1959 was "Venus" by Frankie Avalon.

The date is April 1st, 1959 and it's a Wednesday. Anyone born today will have the star sign Aries. It is April Fool's Day, which means that people are playing practical jokes on one another.

The summer of 1959 is drawing closer and temperatures have started to rise. In music, the song "Venus" by Frankie Avalon is the best-selling record at the moment. Dwight David Eisenhower is currently the President of the United States and Harold Macmillan is the Prime Minister of the United Kingdom.

On TV, people are watching popular shows such as "What's My Line?", "The Jack Benny Program", "Gunsmoke" and "Tonight Starring Jack Paar". Kids and teenagers are watching TV shows such as "Lassie", "Captain Kangaroo", "The Gumby Show" and "Heckle and Jeckle". If you're a kid or a teenager, then you're probably playing with toys such as Crater Critters.

Celebrities, historical figures and notable people who were born on the 1st of April.

Dwight David Eisenhower was the President of the United States on April 1st, 1959.

Harold Macmillan was the Prime Minister of the United Kingdom on April 1st, 1959.

Enter your date of birth below to find out how old you were on April 1st, 1959.

Here are some fun statistics about April 1st, 1959.

Leave a comment and tell everyone why April 1st, 1959 is important to you.