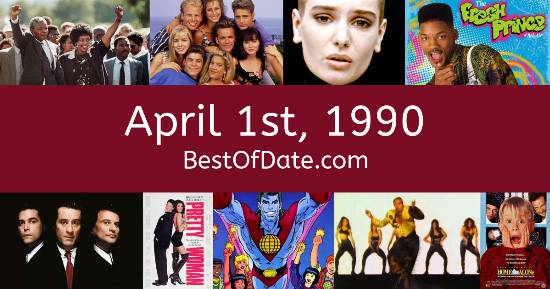 Songs that were on top of the music singles charts in the USA and the United Kingdom on April 1st, 1990:

The date is April 1st, 1990 and it's a Sunday. Anyone born today will have the star sign Aries. Currently, people are enjoying their weekend.

It is April Fool's Day, which means that people are playing practical jokes on one another. The summer of 1990 is drawing closer and temperatures have started to rise. In America, the song Black Velvet by Alannah Myles is on top of the singles charts.

Over in the UK, The Power by Snap is the number one hit song. George W. Bush Snr. is currently the President of the United States and the movie Pretty Woman is at the top of the Box Office. In the United Kingdom, Margaret Thatcher is the current Prime Minister.

In fashion, many of the trends from the late 80s are still popular. Colored tights, denim overalls, leotards, flannel shirts and shoulder pads are all fashionable at the moment. It's 1990, so the airwaves are being dominated by music artists such as Sinéad O'Connor, Paula Abdul, Janet Jackson, Vanilla Ice, Mariah Carey, Stevie B, Madonna and MC Hammer. In the Bronx borough of New York City, 87 people have died following an arson attack on an unlicensed social club called Happy Land. Most of the dead are young Hondurans who were celebrating Carnival.

A riot has recently broken out in Trafalgar Square, London over a poll tax that is due to come into effect. 341 people have been arrested and numerous shops have been left damaged. In wrestling, The Ultimate Warrior has defeated Hulk Hogan at WrestleMania VI. A riot is currently taking place at the Strangeways Prison in Manchester, England.

In the United States, the 1990 Census has started. On TV, people are watching popular shows such as "Charles in Charge", "The Golden Girls", "Star Trek: The Next Generation" and "Seinfeld". Meanwhile, gamers are playing titles such as "Herzog Zwei", "Batman: The Video Game", "Super Mario World" and "Phantasy Star II".

Who was the Prime Minister of the United Kingdom on April 1st, 1990?

Enter your date of birth below to find out how old you were on April 1st, 1990.

Looking for some nostalgia? Here are some Youtube videos relating to April 1st, 1990. Please note that videos are automatically selected by Youtube and that results may vary! Click on the "Load Next Video" button to view the next video in the search playlist. In many cases, you'll find episodes of old TV shows, documentaries, music videos and soap dramas.

Here are some fun statistics about April 1st, 1990.