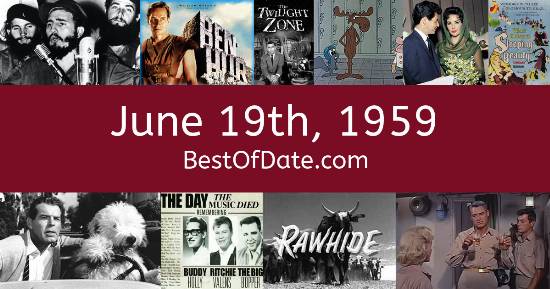 The best-selling single on June 19th, 1959 was "The Battle of New Orleans" by Johnny Horton.

The movie "Ask Any Girl" was at the top of the Box Office on this day.

The date is June 19th, 1959, and it's a Friday. Anyone born today will have the star sign Gemini. Currently, people have "that Friday feeling" and are looking forward to the weekend.

It's summer, so the temperatures are warmer and the evenings are longer than usual. In music, the song "The Battle of New Orleans" by Johnny Horton is the best-selling record at the moment. Dwight David Eisenhower is currently the President of the United States, and the movie Ask Any Girl is at the top of the Box Office.

It's 1959, so radio stations and jukeboxes are playing hit songs from artists such as Johnny Horton, Bobby Darin, Lloyd Price, Frankie Avalon, Paul Anka, The Browns, The Fleetwoods and Wilbert Harrison. If you were to travel back to this day, notable figures such as Clark Gable would be still alive. On TV, people are watching popular shows such as "Fury", "Tonight Starring Jack Paar", "Perry Mason" and "Rawhide".

Kids and teenagers are watching TV shows such as "Tom and Jerry", "Heckle and Jeckle", "The Huckleberry Hound Show" and "Clutch Cargo". Popular toys at the moment include the likes of Tonka trucks, Colorforms, Matchbox toy cars and Crater Critters.

These are trending news stories and fads that were prevalent at this time. These are topics that would have been in the media on June 19th, 1959.

News stories and other events that happened around June 19th, 1959.

Check out our personality summary for people who were born on June 19th, 1959.

If you are looking for some childhood nostalgia, then you should check out June 19th, 1965 instead.

Singer / Television personality.
Born on June 19th, 1962
She was born exactly 3 years after this date.

English politician.
Born on June 19th, 1964
He was born exactly 5 years after this date.

American actress.
Born on June 19th, 1978
She was born exactly 19 years after this date.

Dwight David Eisenhower was the President of the United States on June 19th, 1959.

Harold Macmillan was the Prime Minister of the United Kingdom on June 19th, 1959.

Find out what your age was on June 19th, 1959, by entering your DOB below.
This information is not saved on our server.