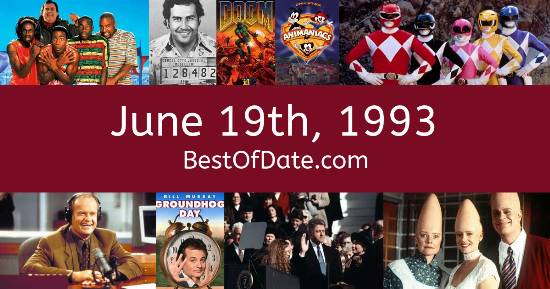 These songs were on top of the music charts in the United States and the United Kingdom on June 19th, 1993.

The movie "Cliffhanger" was at the top of the Box Office on this day.

The date is June 19th, 1993, and it's a Saturday. Anyone born today will have the star sign Gemini. Currently, people are enjoying their weekend.

It's summer, so the temperatures are warmer and the evenings are longer than usual. In America, the song That's The Way Love Goes by Janet Jackson is on top of the singles charts. Over in the UK, Can't Help Falling In Love by UB40 is the number one hit song.

Bill Clinton is currently the President of the United States, and the movie Cliffhanger is at the top of the Box Office. In the United Kingdom, John Major is the current Prime Minister. Texting is not a thing yet. Instead, people are using landline phones and pagers. Furthermore, the vast majority of people still have no idea what "the Internet" is.

Basketball fans are currently in shock at the news that New Jersey Nets shooting guard Dražen Petrović has recently died in a car accident in Germany. Petrović was only 28 years old. In celebrity news, Prince has recently announced that he is changing his name to a symbol. As a result, the media is now referring to him as "the Artist Formerly Known as Prince". The song "I Get Around" has just been released by rapper Tupac Shakur.

Steven Spielberg's new adventure film "Jurassic Park" has recently been released in movie theaters. The movie is currently proving to be a huge box office success. Meanwhile, the film "Last Action Hero", starring Arnold Schwarzenegger, has also made its big screen debut. If you were to travel back to this day, notable figures such as Pat Nixon, Reggie Lewis, Vincent Price and River Phoenix would all be still alive. On TV, people are watching popular shows such as "Only Fools and Horses", "Seinfeld", "Step by Step" and "Mad About You".

Meanwhile, gamers are playing titles such as "Road Rash II", "X-Men", "Star Fox" and "Tiny Toon Adventures 2: Trouble in Wackyland". Kids and teenagers are watching TV shows such as "Garfield and Friends", "Mr. Bean", "Goof Troop" and "The Animals of Farthing Wood". If you're a kid or a teenager, then you're probably playing with toys such as Screwball Scramble, the Sega Genesis / Mega Drive, the Super Nintendo Entertainment System (SNES) and Action Man.

These are trending news stories and fads that were prevalent at this time. These are topics that would have been in the media on June 19th, 1993.

News stories and other events that happened around June 19th, 1993.

Check out our personality summary for people who were born on June 19th, 1993.

Television shows that people were watching in June, 1993.

Popular video games that people were playing in June of 1993.

If you are looking for some childhood nostalgia, then you should check out June 19th, 1999 instead.

Bill Clinton was the President of the United States on June 19th, 1993.

Find out what your age was on June 19th, 1993, by entering your DOB below.
This information is not saved on our server.