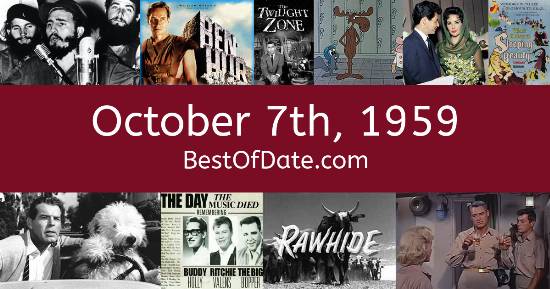 The best-selling single on October 7th, 1959 was "Mack the Knife" by Bobby Darin.

The date is October 7th, 1959, and it's a Wednesday. Anyone born today will have the star sign Libra. The summer is long gone. Temperatures have started to become much cooler and the evenings are beginning to get darker.

Fallen leaves have carpeted driveways, lawns, pathways and sidewalks and there's a fresh earthy scent in the ear. In music, the song "Mack the Knife" by Bobby Darin is the best-selling record at the moment. Dwight David Eisenhower is currently the President of the United States, and the movie But Not for Me is at the top of the Box Office.

It's 1959, so radio stations and jukeboxes are playing hit songs from artists such as Johnny Horton, Bobby Darin, Lloyd Price, Frankie Avalon, Paul Anka, The Browns, The Fleetwoods and Wilbert Harrison. If you were to travel back to this day, notable figures such as Clark Gable would be still alive. On TV, people are watching popular shows such as "Fury", "Perry Mason", "Casey Jones" and "The Many Loves of Dobie Gillis".

Children and teenagers are currently watching television shows such as "Looney Tunes", "Tom and Jerry", "Crusader Rabbit" and "The Ruff and Reddy Show". If you're a kid or a teenager, then you're probably playing with toys such as Dimestore soldiers, BAS-KET Miniature Basketball, Colorforms and Matchbox toy cars.

These are trending news stories and fads that were prevalent at this time. These are topics that would have been in the media on October 7th, 1959.

News stories and other events that happened around October 7th, 1959.

Check out our personality summary for people who were born on October 7th, 1959.

Television shows that people were watching in October, 1959.

If you are looking for some childhood nostalgia, then you should check out October 7th, 1965 instead.

Singer.
Born on October 7th, 1967
She was born exactly 8 years after this date.

Singer.
Born on October 7th, 1978
She was born exactly 19 years after this date.

Soccer player.
Born on October 7th, 1988
He was born exactly 29 years after this date.

Dwight David Eisenhower was the President of the United States on October 7th, 1959.

Find out what your age was on October 7th, 1959, by entering your DOB below.
This information is not saved on our server.

Here are some fun statistics about October 7th, 1959.