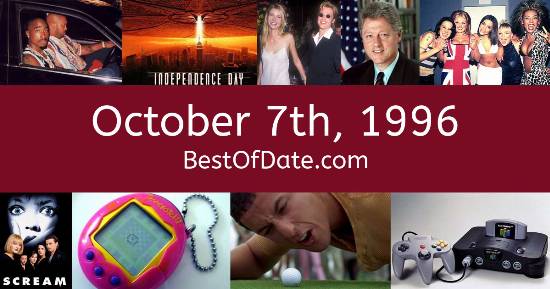 These songs were on top of the music charts in the United States and the United Kingdom on October 7th, 1996.

The date is October 7th, 1996, and it's a Monday. Anyone born today will have the star sign Libra. The summer is long gone. Temperatures have started to become much cooler and the evenings are beginning to get darker.

Fallen leaves have carpeted driveways, lawns, pathways and sidewalks and there's a fresh earthy scent in the ear. In America, the song Macarena by Los Del Rio is on top of the singles charts. Over in the UK, Setting Sun by Chemical Brothers is the number one hit song.

Bill Clinton is currently the President of the United States, and the movie First Wives Club is at the top of the Box Office. In the United Kingdom, John Major is the current Prime Minister. A new form of communication called "text messaging" is continuing to grow in popularity. However, it can only be done if both the sender and the receiver are on the same cell network.

If you were to travel back to this day, notable figures such as Yaki Kadafi, Tiny Tim, Carl Sagan and JonBenét Ramsey would all be still alive. On TV, people are watching popular shows such as "Star Trek: Deep Space Nine", "Lois & Clark: The New Adventures of Superman", "Frasier" and "Everybody Loves Raymond". Meanwhile, gamers are playing titles such as "Theme Park", "Air Combat", "Twisted Metal" and "Virtua Fighter 2".

Children and teenagers are currently watching television shows such as "Hangin' with Mr. Cooper", "Animaniacs", "Brotherly Love" and "Blue's Clues". If you're a kid or a teenager, then you're probably playing with toys such as Lego Pirates, Super Soaker (water gun), Sky Dancers and the Sega Saturn.

These are trending news stories and fads that were prevalent at this time. These are topics that would have been in the media on October 7th, 1996.

News stories and other events that happened around October 7th, 1996.

Check out our personality summary for people who were born on October 7th, 1996.

Television shows that people were watching in October, 1996.

Popular video games that people were playing in October of 1996.

If you are looking for some childhood nostalgia, then you should check out October 7th, 2002 instead.

Bill Clinton was the President of the United States on October 7th, 1996.

John Major was the Prime Minister of the United Kingdom on October 7th, 1996.

Find out what your age was on October 7th, 1996, by entering your DOB below.
This information is not saved on our server.

Here are some fun statistics about October 7th, 1996.