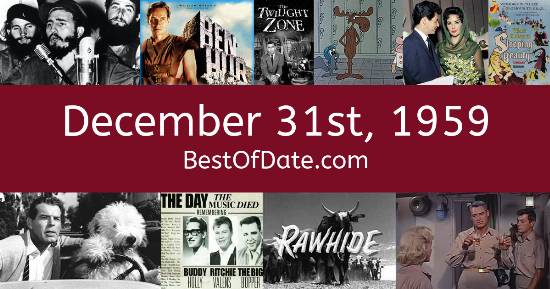 The best-selling single on December 31st, 1959 was "Why" by Frankie Avalon.

The date is December 31st, 1959 and it's a Thursday. Anyone born today will have the star sign Capricorn. It's News Years Eve and everyone is looking forward to what the year 1960 will bring them.

The start of a new decade has everyone excited. In music, the song "Why" by Frankie Avalon is the best-selling record at the moment. Dwight David Eisenhower is currently the President of the United States and the movie Solomon and Sheba is at the top of the Box Office.

It's 1959, so radio stations and jukeboxes are playing hit songs from artists such as Johnny Horton, Bobby Darin, Lloyd Price, Frankie Avalon, Paul Anka, The Browns, The Fleetwoods and Wilbert Harrison. If you were to travel back to this day, notable figures such as Clark Gable would be still alive. On TV, people are watching popular shows such as "What's My Line?", "The Danny Thomas Show", "Wagon Train" and "Maverick".

Kids and teenagers are watching TV shows such as "Looney Tunes", "Tom and Jerry", "The Mickey Mouse Club" and "The Huckleberry Hound Show". If you're a kid or a teenager, then you're probably playing with toys such as Toy Guns, Colorforms, Matchbox toy cars and Playpal dolls.

If you are looking for some childhood nostalgia, then check out December 31st, 1965 instead.

Convicted murderer. Deceased
Born on December 31st, 1960
He was born exactly one year after this date.

South Korean singer.
Born on December 31st, 1977
He was born exactly 18 years after this date.

American businessman.
Born on December 31st, 1977
He was born exactly 18 years after this date.

Dwight David Eisenhower was the President of the United States on December 31st, 1959.

Harold Macmillan was the Prime Minister of the United Kingdom on December 31st, 1959.

Enter your date of birth below to find out how old you were on December 31st, 1959.

Here are some fun statistics about December 31st, 1959.