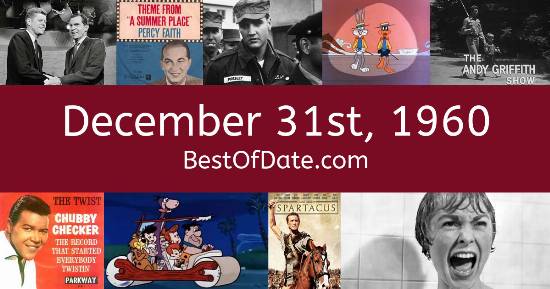 On December 31st, 1960, the following songs were at the top of the music charts in the USA and the UK.

The top "Box Office" movie on this date was the film "Exodus".

The date is December 31st, 1960, and it's a Saturday. Anyone born today will have the star sign Capricorn. Currently, people are enjoying their weekend.

It's News Years Eve and everyone is looking forward to what the year 1961 will bring them. In America, the song Are You Lonesome Tonight by Elvis Presley is on top of the singles charts. Over in the UK, It's Now Or Never by Elvis Presley is the number one hit song.

Dwight David Eisenhower is currently the President of the United States, and the movie Exodus is at the top of the Box Office. In the United Kingdom, Harold Macmillan is the current Prime Minister. Tailfins on cars are extremely popular at the moment. The design looks futuristic, almost like a rocket or the twin rudders on the back of an airplane.

Because it's 1960, radio stations are playing hit songs from artists such as Percy Faith, Elvis Presley, The Everly Brothers, Connie Francis and Johnny Preston. In fashion, many of the trends from the late 1950s are still popular. Women are wearing tailored skirts, short boxy jackets and shift dresses. Trousers are also becoming popular amongst women. Meanwhile, men are wearing polo shirts, argyle socks, sweater vests, loafers and harrington jackets. If you were to travel back to this day, notable figures such as Ernest Hemingway would be still alive.

On TV, people are watching popular shows such as "You Bet Your Life", "Have Gun - Will Travel", "Wagon Train" and "Maverick". Children and teenagers are currently watching television shows such as "Lassie", "Captain Kangaroo", "Leave It to Beaver" and "Bozo: The World's Most Famous Clown". If you're a kid or a teenager, then you're probably playing with toys such as Play-Doh, the Frisbee, the Hula Hoop and Matchbox toy cars.

These are trending news stories and fads that were prevalent at this time. These are topics that would have been in the media on December 31st, 1960.

News stories and other events that happened around December 31st, 1960.

Check out our personality summary for people who were born on December 31st, 1960.

Television shows that people were watching in December, 1960.

If you are looking for some childhood nostalgia, then you should check out December 31st, 1966 instead.

South Korean singer.
Born on December 31st, 1977
He was born exactly 17 years after this date.

American businessman.
Born on December 31st, 1977
He was born exactly 17 years after this date.

Dwight David Eisenhower was the President of the United States on December 31st, 1960.

Harold Macmillan was the Prime Minister of the United Kingdom on December 31st, 1960.

Find out what your age was on December 31st, 1960, by entering your DOB below.
This information is not saved on our server.

Here are some fun statistics about December 31st, 1960.