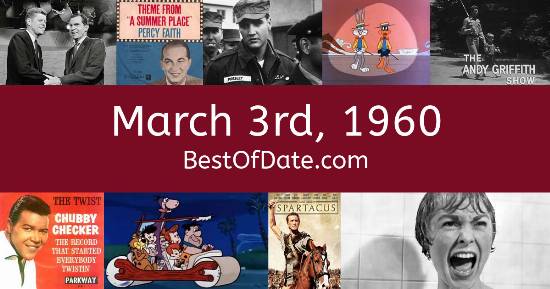 Songs that were on top of the music singles charts in the USA and the United Kingdom on March 3rd, 1960.

The date is March 3rd, 1960 and it's a Thursday. Anyone born today will have the star sign Pisces. Spring has started to creep in and the days are beginning to get longer.

In America, the song Theme From A Summer Place by Percy Faith is on top of the singles charts. Over in the UK, Why? by Anthony Newley is the number one hit song. Dwight David Eisenhower is currently the President of the United States and Harold Macmillan is the Prime Minister of the United Kingdom.

On TV, people are watching popular shows such as "The Ed Sullivan Show", "What's My Line?", "The Jack Benny Program" and "Perry Mason". Kids and teenagers are watching TV shows such as "Looney Tunes", "Captain Kangaroo", "Heckle and Jeckle" and "The Rifleman". If you're a kid or a teenager, then you're probably playing with toys such as Crater Critters and Troll doll.

If you are looking for some childhood nostalgia, then check out March 3rd, 1966 instead.

Celebrities, historical figures and notable people who were born on the 3rd of March.

Dwight David Eisenhower was the President of the United States on March 3rd, 1960.

Harold Macmillan was the Prime Minister of the United Kingdom on March 3rd, 1960.

Enter your date of birth below to find out how old you were on March 3rd, 1960.

Here are some fun statistics about March 3rd, 1960.