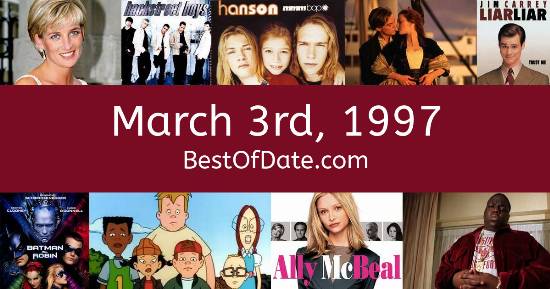 Songs that were on top of the music singles charts in the USA and the United Kingdom on March 3rd, 1997.

The movie "Empire Strikes Back SE" was at the top of the Box Office on March 3rd, 1997.

The date is March 3rd, 1997, and it's a Monday. Anyone born today will have the star sign Pisces. Spring has started to creep in and the days are beginning to get longer.

In America, the song Wannabe by Spice Girls is on top of the singles charts. Over in the UK, Don't Speak by No Doubt is the number one hit song. Bill Clinton is currently the President of the United States, and the movie Empire Strikes Back SE is at the top of the Box Office.

If you were to travel back to this day, notable figures such as The Notorious B.I.G, Gianni Versace, Princess Diana and Mother Teresa would all be still alive. On TV, people are watching popular shows such as "The Nanny", "Ellen", "Party of Five" and "Xena: Warrior Princess". Meanwhile, gamers are playing titles such as "Duke Nukem 3D", "Fade to Black", "Tomb Raider" and "Soul Blade".

Kids and teenagers are watching TV shows such as "Round the Twist", "Animaniacs", "Hang Time" and "Wishbone". Popular toys at the moment include the likes of Sylvanian Families, Lego Pirates, Dear Diary and Fisher-Price Great Adventures Castle.

These are trending news stories and fads that were prevalent at this time. These are topics that would have been in the media on March 3rd, 1997.

News stories and other events that happened around March 3rd, 1997.

Check out our personality summary for people who were born on March 3rd, 1997.

If you are looking for some childhood nostalgia, then you should check out March 3rd, 2003 instead.

Bill Clinton was the President of the United States on March 3rd, 1997.

Find out what your age was on March 3rd, 1997, by entering your DOB below.
This information is not saved on our server.

Here are some fun statistics about March 3rd, 1997.