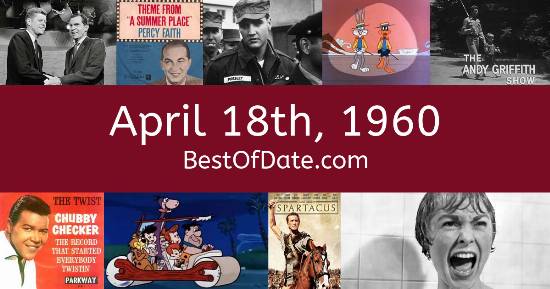 Songs that were on top of the music singles charts in the USA and the United Kingdom on April 18th, 1960.

The date is April 18th, 1960 and it's a Monday. Anyone born today will have the star sign Aries. The summer of 1960 is drawing closer and temperatures have started to rise.

In America, the song Theme From A Summer Place by Percy Faith is on top of the singles charts. Over in the UK, My Old Man's A Dustman by Lonnie Donegan is the number one hit song. Dwight David Eisenhower is currently the President of the United States and the movie Ben-Hur is at the top of the Box Office.

In fashion, many of the trends from the late 1950s are still popular. Women are wearing tailored skirts, short boxy jackets and shift dresses. Trousers are also becoming popular amongst women. Meanwhile, men are wearing polo shirts, argyle socks, sweater vests, loafers and harrington jackets. If you were to travel back to this day, notable figures such as Clark Gable and Ernest Hemingway would be still alive. On TV, people are watching popular shows such as "What's My Line?", "Perry Mason", "Casey Jones" and "77 Sunset Strip".

Children and teenagers are currently watching television shows such as "Looney Tunes", "Captain Kangaroo", "The Rifleman" and "The Adventures of Rocky and Bullwinkle and Friends". Popular toys at the moment include the likes of Crater Critters and Troll doll.

If you are looking for some childhood nostalgia, then check out April 18th, 1966 instead.

American talk show host.
Born on April 18th, 1963
He was born exactly 3 years after this date.

American actress.
Born on April 18th, 1976
She was born exactly 16 years after this date.

Media personality.
Born on April 18th, 1979
She was born exactly 19 years after this date.

White House press secretary.
Born on April 18th, 1988
She was born exactly 28 years after this date.

Dwight David Eisenhower was the President of the United States on April 18th, 1960.

Harold Macmillan was the Prime Minister of the United Kingdom on April 18th, 1960.

Enter your date of birth below to find out how old you were on April 18th, 1960.