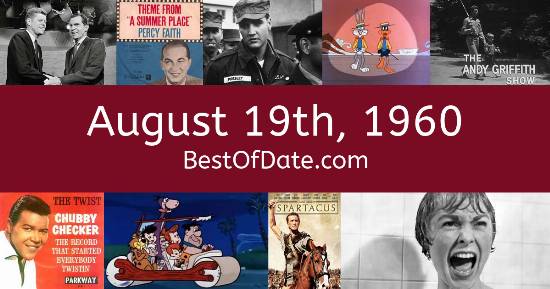 Songs that were on top of the music singles charts in the USA and the United Kingdom on August 19th, 1960.

The date is August 19th, 1960 and it's a Friday. Anyone born today will have the star sign Leo. Currently, people have "that Friday feeling" and are looking forward to the weekend.

It's summer, so the temperatures are warmer and the evenings are longer than usual. In America, the song It's Now Or Never by Elvis Presley is on top of the singles charts. Over in the UK, Please Don't Tease by Cliff Richard & The Shadows is the number one hit song.

Dwight David Eisenhower is currently the President of the United States and the movie Ocean's 11 is at the top of the Box Office. In the United Kingdom, Harold Macmillan is the current Prime Minister. Tailfins on cars are extremely popular at the moment. The design looks futuristic, almost like a rocket or the twin rudders on the back of an airplane.

On TV, people are watching popular shows such as "The Jack Benny Program", "Have Gun - Will Travel", "The Many Loves of Dobie Gillis" and "The Untouchables". Kids and teenagers are watching TV shows such as "Lassie", "Mighty Mouse Playhouse", "The Adventures of Spunky and Tadpole" and "Bozo: The World's Most Famous Clown". Popular toys at the moment include the likes of the Frisbee, Matchbox toy cars, Tonka trucks and Troll doll.

If you are looking for some childhood nostalgia, then check out August 19th, 1966 instead.

Singer and rapper. Deceased
Born on August 19th, 1969
He was born exactly 9 years after this date.

South African model. Deceased
Born on August 19th, 1983
She was born exactly 23 years after this date.

Dwight David Eisenhower was the President of the United States on August 19th, 1960.

Harold Macmillan was the Prime Minister of the United Kingdom on August 19th, 1960.

Enter your date of birth below to find out how old you were on August 19th, 1960.