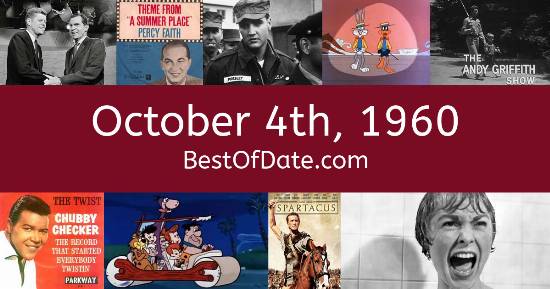 Songs that were on top of the music singles charts in the USA and the United Kingdom on October 4th, 1960.

The date is October 4th, 1960, and it's a Tuesday. Anyone born today will have the star sign Libra. The summer is long gone. Temperatures have started to become much cooler and the evenings are beginning to get darker.

Fallen leaves have carpeted driveways, lawns, pathways and sidewalks and there's a fresh earthy scent in the ear. In America, the song My Heart Has A Mind Of Its Own by Connie Francis is on top of the singles charts. Over in the UK, Tell Laura I Love Her by Ricky Valance is the number one hit song.

Because it's 1960, radio stations are playing hit songs from artists such as Percy Faith, Elvis Presley, The Everly Brothers, Connie Francis and Johnny Preston. In fashion, many of the trends from the late 1950s are still popular. Women are wearing tailored skirts, short boxy jackets and shift dresses. Trousers are also becoming popular amongst women. Meanwhile, men are wearing polo shirts, argyle socks, sweater vests, loafers and harrington jackets. A new cartoon called "The Flintstones" has recently made its debut on television.

If you were to travel back to this day, notable figures such as Clark Gable and Ernest Hemingway would be still alive. On TV, people are watching popular shows such as "What's My Line?", "The Jack Benny Program", "The Danny Thomas Show" and "The Untouchables". Kids and teenagers are watching TV shows such as "Captain Pugwash", "Noggin the Nog", "Snooper and Blabber" and "The Flintstones".

If you're a kid or a teenager, then you're probably playing with toys such as the Hula Hoop, Fisher Price Little People, Barbie and Matchbox toy cars.

These are trending news stories and fads that were prevalent at this time. These are topics that would have been in the media on October 4th, 1960.

Check out our personality summary for people who were born on October 4th, 1960.

Television shows that people were watching in October, 1960.

If you are looking for some childhood nostalgia, then you should check out October 4th, 1966 instead.

Actor.
Born on October 4th, 1967
He was born exactly 7 years after this date.

Dwight David Eisenhower was the President of the United States on October 4th, 1960.

Harold Macmillan was the Prime Minister of the United Kingdom on October 4th, 1960.

Enter your date of birth below to find out how old you were on October 4th, 1960.
This information is not transmitted to our server.

Here are some fun statistics about October 4th, 1960.