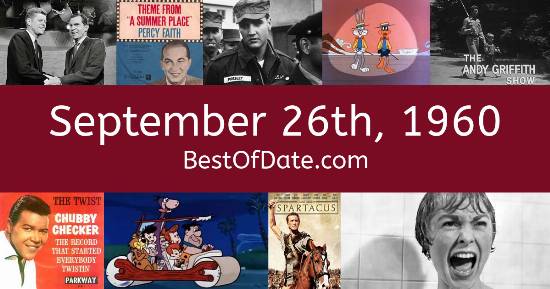 Songs that were on top of the music singles charts in the USA and the United Kingdom on September 26th, 1960.

The date is September 26th, 1960 and it's a Monday. Anyone born today will have the star sign Libra. Schools have started back and autumn has arrived, so temperatures have started to cool and trees are beginning to shed their leaves.

The earthy smells of fall have started to fill the air. In America, the song My Heart Has A Mind Of Its Own by Connie Francis is on top of the singles charts. Over in the UK, Apache by The Shadows is the number one hit song.

Dwight David Eisenhower is currently the President of the United States and Harold Macmillan is the Prime Minister of the United Kingdom. Tailfins on cars are extremely popular at the moment. The design looks futuristic, almost like a rocket or the twin rudders on the back of an airplane. Because it's 1960, radio stations are playing hit songs from artists such as Percy Faith, Elvis Presley, The Everly Brothers, Connie Francis and Johnny Preston.

In fashion, many of the trends from the late 1950s are still popular. Women are wearing tailored skirts, short boxy jackets and shift dresses. Trousers are also becoming popular amongst women. Meanwhile, men are wearing polo shirts, argyle socks, sweater vests, loafers and harrington jackets. A horror film called "Psycho" is currently being shown in movie theaters. On TV, people are watching popular shows such as "The Ed Sullivan Show", "77 Sunset Strip", "Rawhide" and "The Many Loves of Dobie Gillis".

Kids and teenagers are watching TV shows such as "Looney Tunes", "Leave It to Beaver", "The Many Loves of Dobie Gillis" and "The Adventures of Rocky and Bullwinkle and Friends". Popular toys at the moment include the likes of Crater Critters, Troll doll, Astrobase and Etch A Sketch.

If you are looking for some childhood nostalgia, then check out September 26th, 1966 instead.

Dwight David Eisenhower was the President of the United States on September 26th, 1960.

Harold Macmillan was the Prime Minister of the United Kingdom on September 26th, 1960.

Enter your date of birth below to find out how old you were on September 26th, 1960.

Here are some fun statistics about September 26th, 1960.