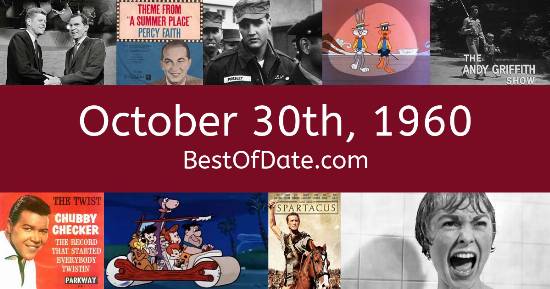 Songs that were on top of the music singles charts in the USA and the United Kingdom on October 30th, 1960.

The date is October 30th, 1960 and it's a Sunday. Anyone born today will have the star sign Scorpio. Currently, people are enjoying their weekend.

The summer is long gone. Temperatures have started to become much cooler and the evenings are beginning to get darker. Fallen leaves have carpeted driveways, lawns, pathways and sidewalks and there's a fresh earthy scent in the ear. Halloween of 1960 is just days away. People are watching horror movies and thinking about which costume they are going to wear. Others are organizing parties.

In America, the song I Want To Be Wanted by Brenda Lee is on top of the singles charts. Over in the UK, Only The Lonely by Roy Orbison is the number one hit song. Dwight David Eisenhower is currently the President of the United States and the movie Ben-Hur is at the top of the Box Office.

In fashion, many of the trends from the late 1950s are still popular. Women are wearing tailored skirts, short boxy jackets and shift dresses. Trousers are also becoming popular amongst women. Meanwhile, men are wearing polo shirts, argyle socks, sweater vests, loafers and harrington jackets. If you were to travel back to this day, notable figures such as Clark Gable and Ernest Hemingway would be still alive. On TV, people are watching popular shows such as "What's My Line?", "You Bet Your Life", "Rawhide" and "The Untouchables".

Children and teenagers are currently watching television shows such as "Tom and Jerry", "The Many Loves of Dobie Gillis", "The Adventures of Rocky and Bullwinkle and Friends" and "My Three Sons". Popular toys at the moment include the likes of Play-Doh, Metal House robots, the Hula Hoop and Astrobase.

If you are looking for some childhood nostalgia, then check out October 30th, 1966 instead.

American businesswoman.
Born on October 30th, 1981
She was born exactly 21 years after this date.

Dwight David Eisenhower was the President of the United States on October 30th, 1960.

Harold Macmillan was the Prime Minister of the United Kingdom on October 30th, 1960.

Enter your date of birth below to find out how old you were on October 30th, 1960.

Here are some fun statistics about October 30th, 1960.