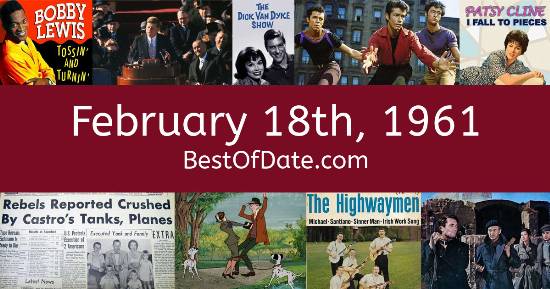 Songs that were on top of the music singles charts in the USA and the United Kingdom on February 18th, 1961.

The date is February 18th, 1961 and it's a Saturday. Anyone born today will have the star sign Aquarius. Currently, people are enjoying their weekend.

Valentine's Day of 1961 has just passed. In America, the song Calcutta by Lawrence Welk is on top of the singles charts. Over in the UK, Are You Lonesome Tonight by Elvis Presley is the number one hit song.

John Fitzgerald Kennedy is currently the President of the United States and the movie Exodus is at the top of the Box Office. In the United Kingdom, Harold Macmillan is the current Prime Minister. Tailfins on cars are extremely popular at the moment. The design looks futuristic, almost like a rocket or the twin rudders on the back of an airplane.

On TV, people are watching popular shows such as "The Jack Benny Program", "Tonight Starring Jack Paar", "77 Sunset Strip" and "Bonanza". Children and teenagers are currently watching television shows such as "Looney Tunes", "Mighty Mouse Playhouse", "The Dick Tracy Show" and "Mister Ed". If you're a kid or a teenager, then you're probably playing with toys such as Crater Critters, Troll doll, Astrobase and Etch A Sketch.

If you are looking for some childhood nostalgia, then check out February 18th, 1967 instead.

Rapper.
Born on February 18th, 1965
He was born exactly 4 years after this date.

Former soccer player.
Born on February 18th, 1975
He was born exactly 14 years after this date.

Internet meme.
Born on February 18th, 1990
He was born exactly 29 years after this date.

John Fitzgerald Kennedy was the President of the United States on February 18th, 1961.

Harold Macmillan was the Prime Minister of the United Kingdom on February 18th, 1961.

Enter your date of birth below to find out how old you were on February 18th, 1961.

Here are some fun statistics about February 18th, 1961.