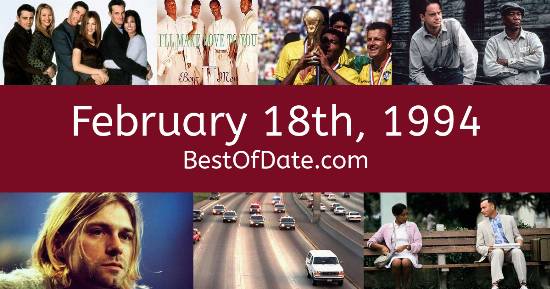 These songs were on top of the music charts in the United States and the United Kingdom on February 18th, 1994.

The movie "On Deadly Ground" was at the top of the Box Office on this day.

The date is February 18th, 1994, and it's a Friday. Anyone born today will have the star sign Aquarius. Currently, people have "that Friday feeling" and are looking forward to the weekend.

Valentine's Day of 1994 has just passed. In America, the song The Power Of Love by Celine Dion is on top of the singles charts. Over in the UK, Things Can Only Get Better by D:ream is the number one hit song.

Bill Clinton is currently the President of the United States, and the movie On Deadly Ground is at the top of the Box Office. In the United Kingdom, John Major is the current Prime Minister. Meanwhile, in technology news, a relatively new storage format called the CD is beginning to outpace the regular cassette tape in music sales. The disc-based format gives listeners the ability to skip between songs instead of having to manually rewind and forward.

It's 1994, so radio stations are being dominated by the likes of All-4-One, Boyz II Men, R. Kelly, Céline Dion, Bruce Springsteen, Bryan Adams, Meat Loaf, Bon Jovi, Wet Wet Wet, Rednex and Mariah Carey. In Europe, a war is continuing to rage on in Bosnia and Herzegovina. Recently, 68 people were killed when the Bosnian Serb Army fired a mortar shell at an open air market place in Sarajevo. The 1994 Winter Olympics are currently taking place in Lillehammer, Norway. On the same day that the games started, Edvard Munch's painting "The Scream" was stolen from the National Gallery in Oslo.

If you were to travel back to this day, notable figures such as Bill Hicks, John Candy, Kurt Cobain and Richard Nixon would all be still alive. On TV, people are watching popular shows such as "Sherlock Holmes", "Matlock", "Full House" and "In the Heat of the Night". Meanwhile, gamers are playing titles such as "Tiny Toon Adventures 2: Trouble in Wackyland", "Bubsy in Claws Encounters of the Furred Kind", "Shinobi III: Return of the Ninja Master" and "Doom".

Kids and teenagers are watching TV shows such as "Home Improvement", "Barney & Friends", "Goof Troop" and "Living Single". If you're a kid or a teenager, then you're probably playing with toys such as the Easy-Bake Oven, Polly Pocket, Teen Talk Barbie and Jurassic Park: Young Tyrannosaurus Rex.

These are trending news stories and fads that were prevalent at this time. These are topics that would have been in the media on February 18th, 1994.

Check out our personality summary for people who were born on February 18th, 1994.

If you are looking for some childhood nostalgia, then you should check out February 18th, 2000, instead.

Celebrities, historical figures, and other notable people who were born on February 18th.

Bill Clinton was the President of the United States on February 18th, 1994.

Enter your date of birth below to find out how old you were on February 18th, 1994.
This information is not transmitted to our server.

Here are some fun statistics about February 18th, 1994.