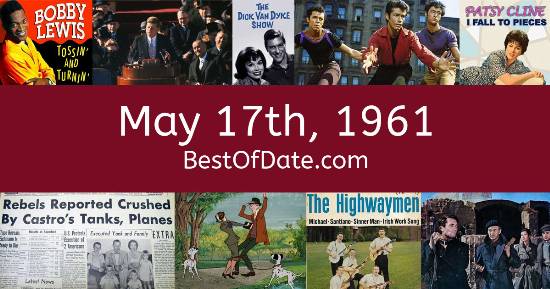 Songs that were on top of the music singles charts in the USA and the United Kingdom on May 17th, 1961.

The movie "The Absent-Minded Professor" was at the top of the box office on May 17th, 1961.

The date is May 17th, 1961 and it's a Wednesday. Anyone born today will have the star sign Taurus. The summer of 1961 has finally arrived. The weather has warmed up and the evenings are brighter than usual.

In America, the song Runaway by Del Shannon is on top of the singles charts. Over in the UK, On The Rebound by Floyd Cramer is the number one hit song. John Fitzgerald Kennedy is currently the President of the United States and the movie The Absent-Minded Professor is at the top of the Box Office.

Because it's 1961, radio stations are playing hit songs from artists such as Bert Kaempfert, Chubby Checker, Elvis Presley, Del Shannon, Bobby Lewis and Jimmy Dean. If you were to travel back to this day, notable figures such as Ernest Hemingway and Marilyn Monroe would be still alive. On TV, people are watching popular shows such as "The Jack Benny Program", "Have Gun - Will Travel", "Rawhide" and "The Andy Griffith Show".

Kids and teenagers are watching TV shows such as "Lassie", "Mighty Mouse Playhouse", "Captain Pugwash" and "The Bugs Bunny Show". Popular toys at the moment include the likes of Wooly Willy, the Frisbee, Metal House robots and Crater Critters.

Notable events that occurred around May 17th, 1961.

If you are looking for some childhood nostalgia, then check out May 17th, 1967 instead.

John Fitzgerald Kennedy was the President of the United States on May 17th, 1961.

Harold Macmillan was the Prime Minister of the United Kingdom on May 17th, 1961.