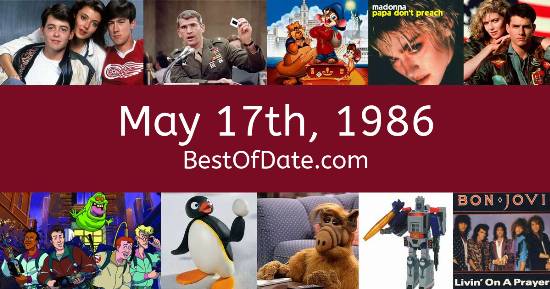 Songs that were on top of the music singles charts in the USA and the United Kingdom on May 17th, 1986.

The date is May 17th, 1986 and it's a Saturday. Anyone born today will have the star sign Taurus. Currently, people are enjoying their weekend.

Because it's 1986, the radio stations are being dominated by the likes of Falco, Madonna, the Pet Shop Boys, Berlin, Whitney Houston, Dionne and Huey Lewis and the News. On TV, people are watching popular shows such as "Dallas", "Magnum, P.I.", "'Allo 'Allo!" and "ThunderCats". Meanwhile, gamers are playing titles such as "Pac-Man", "Tetris", "The Way of the Exploding Fist" and "Ultima IV: Quest of the Avatar".

Kids and teenagers are watching TV shows such as "Cockleshell Bay", "Alvin and the Chipmunks", "Heathcliff" and "Growing Pains". If you're a kid or a teenager, then you're probably playing with toys such as Snoopy Sno-Cone Machine, Big wheel (tricycle), Fisher-Price Little People (Farm) and My Little Pony (figures).

Notable events that occurred around May 17th, 1986.

Celebrities, historical figures and notable people who were born on the 17th of May.

Historical weather information for May 17th, 1986.

Ronald Reagan was the President of the United States on May 17th, 1986.

Margaret Thatcher was the Prime Minister of the United Kingdom on May 17th, 1986.

Leave a comment and tell everyone why May 17th, 1986 is important to you.