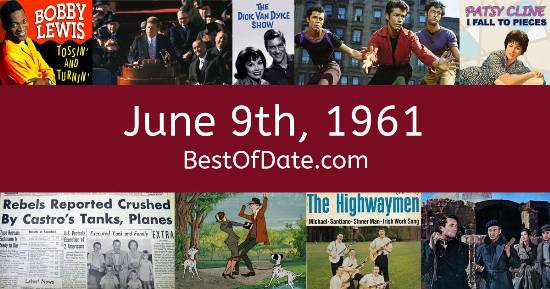 Songs that were on top of the music singles charts in the USA and the United Kingdom on June 9th, 1961.

The movie "The Pleasure of His Company" was at the top of the box office on June 9th, 1961.

The date is June 9th, 1961 and it's a Friday. Anyone born today will have the star sign Gemini. Currently, people have "that Friday feeling" and are looking forward to the weekend.

It's summer, so the temperatures are warmer and the evenings are longer than usual. In America, the song Running Scared by Roy Orbison is on top of the singles charts. Over in the UK, Surrender by Elvis Presley is the number one hit song.

John Fitzgerald Kennedy is currently the President of the United States and the movie The Pleasure of His Company is at the top of the Box Office. In the United Kingdom, Harold Macmillan is the current Prime Minister. Tailfins on cars are extremely popular at the moment. The design looks futuristic, almost like a rocket or the twin rudders on the back of an airplane.

On TV, people are watching popular shows such as "The Ed Sullivan Show", "The Jack Benny Program", "Bonanza" and "Route 66". Kids and teenagers are watching TV shows such as "The Rifleman", "Bozo: The World's Most Famous Clown", "Snooper and Blabber" and "My Three Sons". If you're a kid or a teenager, then you're probably playing with toys such as Wooly Willy, Matchbox toy cars, Tonka trucks and Troll doll.

If you are looking for some childhood nostalgia, then check out June 9th, 1967 instead.

John Fitzgerald Kennedy was the President of the United States on June 9th, 1961.

Harold Macmillan was the Prime Minister of the United Kingdom on June 9th, 1961.

Enter your date of birth below to find out how old you were on June 9th, 1961.

Here are some fun statistics about June 9th, 1961.