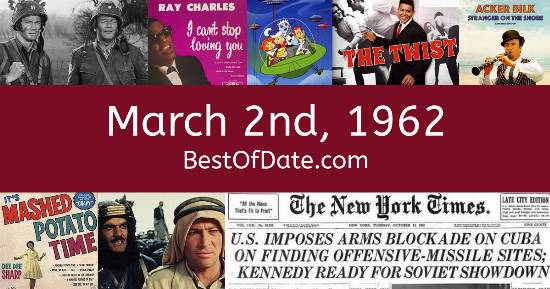 Songs that were on top of the music singles charts in the USA and the United Kingdom on March 2nd, 1962.

The date is March 2nd, 1962 and it's a Friday. Anyone born today will have the star sign Pisces. Currently, people have "that Friday feeling" and are looking forward to the weekend.

Spring has started to creep in and the days are beginning to get longer. In America, the song Duke Of Earl by Gene Chandler is on top of the singles charts. Over in the UK, Can't Help Falling In Love / Rock-a-hula Baby by Elvis Presley is the number one hit song.

On TV, people are watching popular shows such as "Gunsmoke", "Tonight Starring Jack Paar", "Wagon Train" and "Bonanza". Children and teenagers are currently watching television shows such as "Tom and Jerry", "The Many Loves of Dobie Gillis", "Dennis the Menace" and "The Flintstones". If you're a kid or a teenager, then you're probably playing with toys such as Crater Critters, Troll doll, Ken (doll) and Chatter Telephone.

If you are looking for some childhood nostalgia, then check out March 2nd, 1968 instead.

John Fitzgerald Kennedy was the President of the United States on March 2nd, 1962.

Harold Macmillan was the Prime Minister of the United Kingdom on March 2nd, 1962.

Enter your date of birth below to find out how old you were on March 2nd, 1962.

Here are some fun statistics about March 2nd, 1962.