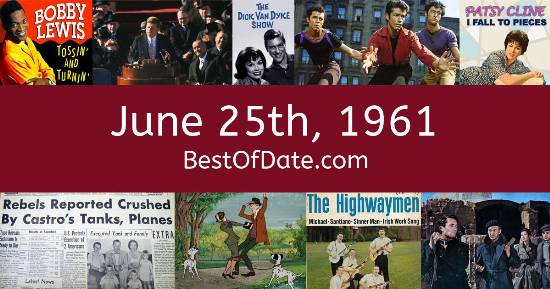 Songs that were on top of the music singles charts in the USA and the United Kingdom on June 25th, 1961.

The date is June 25th, 1961 and it's a Sunday. Anyone born today will have the star sign Cancer. Currently, people are enjoying their weekend.

It's summer, so the temperatures are warmer and the evenings are longer than usual. In America, the song Moody River by Pat Boone is on top of the singles charts. Over in the UK, Surrender by Elvis Presley is the number one hit song.

John Fitzgerald Kennedy is currently the President of the United States and the movie The Pleasure of His Company is at the top of the Box Office. In the United Kingdom, Harold Macmillan is the current Prime Minister. Tailfins on cars are extremely popular at the moment. The design looks futuristic, almost like a rocket or the twin rudders on the back of an airplane.

In fashion, many of the trends from the late 1950s are still popular. Women are wearing tailored skirts, short boxy jackets and shift dresses. Trousers are also becoming popular amongst women. Meanwhile, men are wearing polo shirts, argyle socks, sweater vests, loafers and harrington jackets. Because it's 1961, radio stations are playing hit songs from artists such as Bert Kaempfert, Chubby Checker, Elvis Presley, Del Shannon, Bobby Lewis and Jimmy Dean. The films "The Guns of Navarone" and "The Parent Trap" are currently being shown in movie theaters.

If you were to travel back to this day, notable figures such as Ernest Hemingway and Marilyn Monroe would be still alive. On TV, people are watching popular shows such as "What's My Line?", "The Jack Benny Program", "Perry Mason" and "77 Sunset Strip". Children and teenagers are currently watching television shows such as "Tom and Jerry", "Captain Pugwash", "King Leonardo and His Short Subjects" and "The Dick Tracy Show".

Popular toys at the moment include the likes of the Hula Hoop, Crater Critters, Playpal dolls and Ken (doll).

If you are looking for some childhood nostalgia, then check out June 25th, 1967 instead.

Singer. Deceased
Born on June 25th, 1963
He was born exactly 2 years after this date.

South Korean singer.
Born on June 25th, 1982
He was born exactly 21 years after this date.

John Fitzgerald Kennedy was the President of the United States on June 25th, 1961.

Harold Macmillan was the Prime Minister of the United Kingdom on June 25th, 1961.