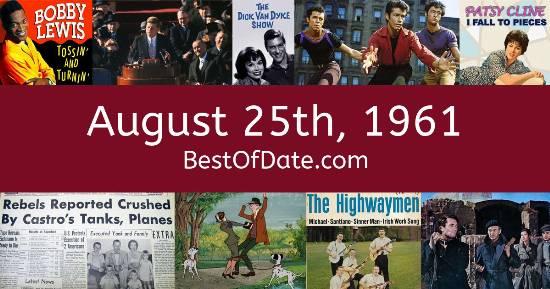 On August 25th, 1961, the following songs were at the top of the music charts in the USA and the UK.

The top "Box Office" movie on this date was the film "The Guns of Navarone".

The date is August 25th, 1961, and it's a Friday. Anyone born today will have the star sign Virgo. Currently, people have "that Friday feeling" and are looking forward to the weekend.

The summer of 1961 is coming to an end and fall is just around the corner. In America, the song Tossin' And Turnin' by Bobby Lewis is on top of the singles charts. Over in the UK, You Don't Know by Helen Shapiro is the number one hit song.

John Fitzgerald Kennedy is currently the President of the United States, and the movie The Guns of Navarone is at the top of the Box Office. In the United Kingdom, Harold Macmillan is the current Prime Minister. Tailfins on cars are extremely popular at the moment. The design looks futuristic, almost like a rocket or the twin rudders on the back of an airplane.

On TV, people are watching popular shows such as "What's My Line?", "Tonight Starring Jack Paar", "77 Sunset Strip" and "Danger Man". Kids and teenagers are watching TV shows such as "The Gumby Show", "Augie Doggie and Doggie Daddy", "The Adventures of Rocky and Bullwinkle and Friends" and "King Leonardo and His Short Subjects". Popular toys at the moment include the likes of Fisher Price Little People, Matchbox toy cars, Astrobase and Ken (doll).

These are trending news stories and fads that were prevalent at this time. These are topics that would have been in the media on August 25th, 1961.

News stories and other events that happened around August 25th, 1961.

Check out our personality summary for people who were born on August 25th, 1961.

Television shows that people were watching in August, 1961.

If you are looking for some childhood nostalgia, then you should check out August 25th, 1967 instead.

Wrestler. Deceased
Born on August 25th, 1971
He was born exactly 10 years after this date.

John Fitzgerald Kennedy was the President of the United States on August 25th, 1961.

Find out what your age was on August 25th, 1961, by entering your DOB below.
This information is not saved on our server.