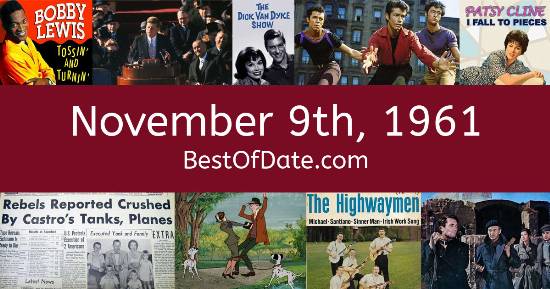 These songs were on top of the music charts in the United States and the United Kingdom on November 9th, 1961.

The movie "Breakfast at Tiffany's" was at the top of the Box Office on November 9th, 1961.

The date is November 9th, 1961, and it's a Thursday. Anyone born today will have the star sign Scorpio. It's November, so the evenings are getting darker and the days are getting colder.

In America, the song Big Bad John by Jimmy Dean is on top of the singles charts. Over in the UK, Little Sister / His Latest Flame by Elvis Presley is the number one hit song. John Fitzgerald Kennedy is currently the President of the United States, and the movie Breakfast at Tiffany's is at the top of the Box Office.

Because it's 1961, radio stations are playing hit songs from artists such as Bert Kaempfert, Chubby Checker, Elvis Presley, Del Shannon, Bobby Lewis and Jimmy Dean. If you were to travel back to this day, notable figures such as Marilyn Monroe would be still alive. On TV, people are watching popular shows such as "Bonanza", "The Twilight Zone", "Danger Man" and "Route 66".

Children and teenagers are currently watching television shows such as "Mighty Mouse Playhouse", "Captain Pugwash", "The Adventures of Spunky and Tadpole" and "The Flintstones". If you're a kid or a teenager, then you're probably playing with toys such as BAS-KET Miniature Basketball, Wooly Willy, Metal House robots and the Hula Hoop.

These are trending news stories and fads that were prevalent at this time. These are topics that would have been in the media on November 9th, 1961.

News stories and other events that happened around November 9th, 1961.

Check out our personality summary for people who were born on November 9th, 1961.

If you are looking for some childhood nostalgia, then you should check out November 9th, 1967 instead.

Wrestler.
Born on November 9th, 1970
He was born exactly 9 years after this date.

Singer.
Born on November 9th, 1973
He was born exactly 12 years after this date.

Soccer player.
Born on November 9th, 1974
He was born exactly 13 years after this date.

English TV presenter. Deceased
Born on November 9th, 1979
She was born exactly 18 years after this date.

John Fitzgerald Kennedy was the President of the United States on November 9th, 1961.

Find out what your age was on November 9th, 1961, by entering your DOB below.
This information is not saved on our server.

Here are some fun statistics about November 9th, 1961.