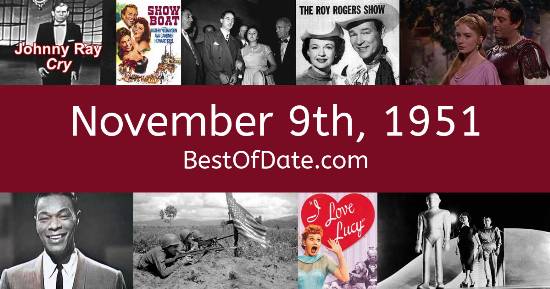 The best-selling single on November 9th, 1951 was "Cold, Cold Heart" by Tony Bennett.

The date is November 9th, 1951, and it's a Friday. Anyone born today will have the star sign Scorpio. Currently, people have "that Friday feeling" and are looking forward to the weekend.

It's November, so the evenings are getting darker and the days are getting colder. In music, the song "Cold, Cold Heart" by Tony Bennett is the best-selling record at the moment. Harry S. Truman is currently the President of the United States, and Winston Churchill is the Prime Minister of the United Kingdom.

On TV, people are watching popular shows such as "What's My Line?", "The George Burns and Gracie Allen Show", "The Jack Benny Program" and "Racket Squad". Kids and teenagers are watching TV shows such as "Looney Tunes", "Tom and Jerry", "Jim and Judy in Teleland" and "Crusader Rabbit". Popular toys at the moment include the likes of Dimestore soldiers, BAS-KET Miniature Basketball, Butch the Pup Toy and Colorforms.

These are trending news stories and fads that were prevalent at this time. These are topics that would have been in the media on November 9th, 1951.

News stories and other events that happened around November 9th, 1951.

Check out our personality summary for people who were born on November 9th, 1951.

Television shows that people were watching in November, 1951.

If you are looking for some childhood nostalgia, then you should check out November 9th, 1957 instead.

TV presenter. Deceased
Born on November 9th, 1961
She was born exactly 10 years after this date.

Wrestler.
Born on November 9th, 1970
He was born exactly 19 years after this date.

Singer.
Born on November 9th, 1973
He was born exactly 22 years after this date.

Italian soccer player.
Born on November 9th, 1974
He was born exactly 23 years after this date.

English TV presenter. Deceased
Born on November 9th, 1979
She was born exactly 28 years after this date.

Harry S. Truman was the President of the United States on November 9th, 1951.

Find out what your age was on November 9th, 1951, by entering your DOB below.
This information is not saved on our server.

Here are some fun statistics about November 9th, 1951.