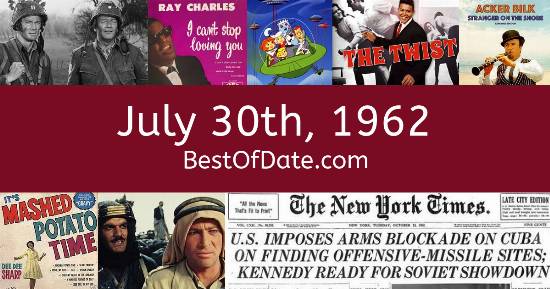 Songs that were on top of the music singles charts in the USA and the United Kingdom on July 30th, 1962.

The date is July 30th, 1962 and it's a Monday. Anyone born today will have the star sign Leo. It's summer, so the temperatures are warmer and the evenings are longer than usual.

In America, the song Roses Are Red by Bobby Vinton is on top of the singles charts. Over in the UK, I Remember You by Frank Ifield is the number one hit song. John Fitzgerald Kennedy is currently the President of the United States and the movie That Touch of Mink is at the top of the Box Office.

If you were to travel back to this day, notable figures such as Marilyn Monroe, Robert Frost, Ernie Davis and John F. Kennedy would all be still alive. On TV, people are watching popular shows such as "Wagon Train", "77 Sunset Strip", "The Many Loves of Dobie Gillis" and "Hazel". Kids and teenagers are watching TV shows such as "Heckle and Jeckle", "Dennis the Menace", "The Dick Tracy Show" and "Mister Ed".

Popular toys at the moment include the likes of Troll doll, Ken (doll), Chatter Telephone and Tammy (doll).

If you are looking for some childhood nostalgia, then check out July 30th, 1968 instead.

Actress.
Born on July 30th, 1963
She was born exactly one year after this date.

American actor.
Born on July 30th, 1968
He was born exactly 6 years after this date.

Comedian and actor.
Born on July 30th, 1971
He was born exactly 9 years after this date.

John Fitzgerald Kennedy was the President of the United States on July 30th, 1962.

Harold Macmillan was the Prime Minister of the United Kingdom on July 30th, 1962.