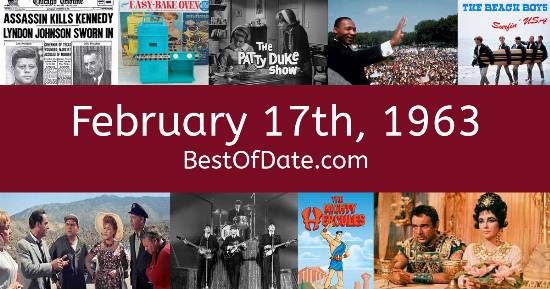 Songs that were on top of the music singles charts in the USA and the United Kingdom on February 17th, 1963:

The date is February 17th, 1963 and it's a Sunday. Anyone born today will have the star sign Aquarius. Currently, people are enjoying their weekend.

Valentine's Day of 1963 has just passed. In America, the song Hey Paula by Paul & Paula is on top of the singles charts. Over in the UK, Diamonds by Jet Harris & Tony Meehan is the number one hit song.

John Fitzgerald Kennedy is currently the President of the United States and Harold Macmillan is the Prime Minister of the United Kingdom. Because it's 1963, radio stations are playing hit songs from music artists such as The Chiffons, Paul & Paula, The Four Seasons, Little Stevie Wonder, Jimmy Gilmer and the Fireballs and The Singing Nun. People are watching popular TV shows such as "The Ed Sullivan Show", "Gunsmoke", "Perry Mason" and "Danger Man".

Kids and teenagers are watching TV shows such as "Looney Tunes", "Dennis the Menace", "The Adventures of Rocky and Bullwinkle and Friends" and "The Bugs Bunny Show". Popular toys include the likes of "Astrobase", "Etch A Sketch", "Rock-a-Stack" and "Mouse Trap".

Celebrities and historical figures that were born on the 17th of February:

Who was the Prime Minister of the United Kingdom on February 17th, 1963?

Enter your date of birth below to find out how old you were on February 17th, 1963.

Looking for some nostalgia? Here are some Youtube videos relating to February 17th, 1963. Please note that videos are automatically selected by Youtube and that results may vary! Click on the "Load Next Video" button to view the next video in the search playlist. In many cases, you'll find episodes of old TV shows, documentaries, music videos and soap dramas.

Here are some fun statistics about February 17th, 1963.