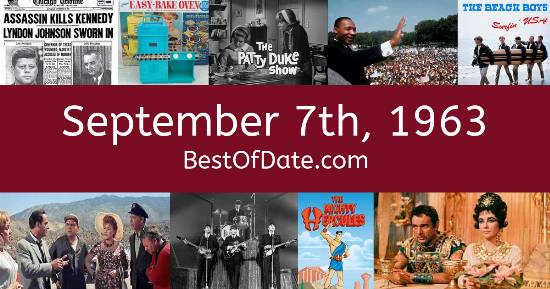 These songs were on top of the music charts in the United States and the United Kingdom on September 7th, 1963.

The movie "Cleopatra" was at the top of the Box Office on September 7th, 1963.

The date is September 7th, 1963, and it's a Saturday. Anyone born today will have the star sign Virgo. Currently, people are enjoying their weekend.

Schools and colleges are starting again and Autumn has officially arrived. As a result, temperatures are beginning to cool and trees are starting to shed their leaves. In America, the song My Boyfriend's Back by The Angels is on top of the singles charts. Over in the UK, Bad To Me by Billy J. Kramer & The Dakota's is the number one hit song.

John Fitzgerald Kennedy is currently the President of the United States, and the movie Cleopatra is at the top of the Box Office. In the United Kingdom, Harold Macmillan is the current Prime Minister. In fashion, many of the trends from the late 1950s are still popular. Women are wearing tailored skirts, short boxy jackets and shift dresses. Trousers are also becoming popular amongst women. Meanwhile, men are wearing polo shirts, argyle socks, sweater vests, loafers and harrington jackets.

Because it's 1963, radio stations are playing hit songs from music artists such as The Chiffons, Paul & Paula, The Four Seasons, Little Stevie Wonder, Jimmy Gilmer and the Fireballs and The Singing Nun. If you were to travel back to this day, notable figures such as John F. Kennedy, Herbert Hoover and Sam Cooke would all be still alive. On TV, people are watching popular shows such as "What's My Line?", "Rawhide", "The Twilight Zone" and "Hazel".

Kids and teenagers are watching TV shows such as "Mighty Mouse Playhouse", "The Gumby Show", "Leave It to Beaver" and "Dennis the Menace". If you're a kid or a teenager, then you're probably playing with toys such as Fisher Price Little People, Crater Critters, Tonka trucks and Rock-a-Stack.

These are trending news stories and fads that were prevalent at this time. These are topics that would have been in the media on September 7th, 1963.

News stories and other events that happened around September 7th, 1963.

Check out our personality summary for people who were born on September 7th, 1963.

Television shows that people were watching in September, 1963.

If you are looking for some childhood nostalgia, then you should check out September 7th, 1969 instead.

John Fitzgerald Kennedy was the President of the United States on September 7th, 1963.

Harold Macmillan was the Prime Minister of the United Kingdom on September 7th, 1963.

Find out what your age was on September 7th, 1963, by entering your DOB below.
This information is not saved on our server.

Here are some fun statistics about September 7th, 1963.