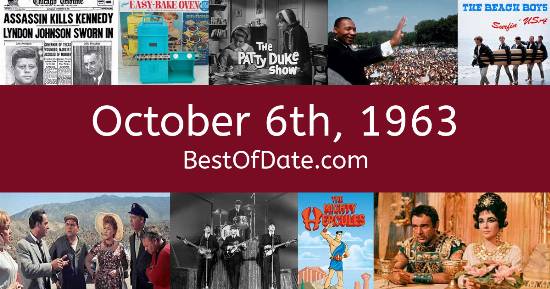 Songs that were on top of the music singles charts in the USA and the United Kingdom on October 6th, 1963.

The date is October 6th, 1963 and it's a Sunday. Anyone born today will have the star sign Libra. Currently, people are enjoying their weekend.

The summer is long gone. Temperatures have started to become much cooler and the evenings are beginning to get darker. Fallen leaves have carpeted driveways, lawns, pathways and sidewalks and there's a fresh earthy scent in the ear. In America, the song Blue Velvet by Bobby Vinton is on top of the singles charts.

Over in the UK, She Loves You by The Beatles is the number one hit song. John Fitzgerald Kennedy is currently the President of the United States and the movie The V.I.P.s is at the top of the Box Office. In the United Kingdom, Harold Macmillan is the current Prime Minister.

On TV, people are watching popular shows such as "The Ed Sullivan Show", "The Danny Thomas Show", "77 Sunset Strip" and "My Favorite Martian". Children and teenagers are currently watching television shows such as "Captain Kangaroo", "Leave It to Beaver", "Dennis the Menace" and "The Flintstones". If you're a kid or a teenager, then you're probably playing with toys such as Crater Critters, Astrobase, Rock-a-Stack and Chatter Telephone.

If you are looking for some childhood nostalgia, then check out October 6th, 1969 instead.

Soccer player.
Born on October 6th, 1966
He was born exactly 3 years after this date.

Actress.
Born on October 6th, 1970
She was born exactly 7 years after this date.

Social media personality.
Born on October 6th, 2000
She was born exactly 37 years after this date.

John Fitzgerald Kennedy was the President of the United States on October 6th, 1963.

Harold Macmillan was the Prime Minister of the United Kingdom on October 6th, 1963.

Enter your date of birth below to find out how old you were on October 6th, 1963.

Here are some fun statistics about October 6th, 1963.