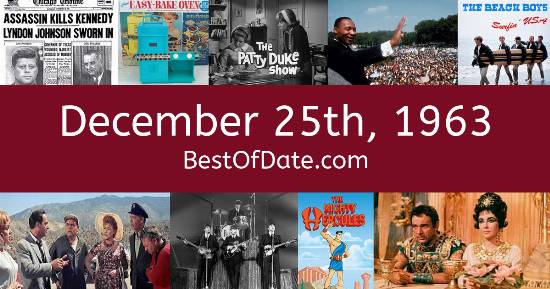 Songs that were on top of the music singles charts in the USA and the United Kingdom on December 25th, 1963.

The date is December 25th, 1963 and it's a Wednesday. Anyone born today will have the star sign Capricorn. It's Christmas Day of 1963, so most people are exchanging presents and spending time at home with their families.

In America, the song Dominique by The Singing Nun is on top of the singles charts. Over in the UK, I Want To Hold Your Hand by The Beatles is the number one hit song. Lyndon Baines Johnson is currently the President of the United States and the movie It's a Mad, Mad, Mad, Mad World is at the top of the Box Office.

If you were to travel back to this day, notable figures such as Herbert Hoover and Sam Cooke would be still alive. On TV, people are watching popular shows such as "The Ed Sullivan Show", "Gunsmoke", "Perry Mason" and "The Farmer's Daughter". Children and teenagers are currently watching television shows such as "Leave It to Beaver", "Dennis the Menace", "Top Cat" and "The Mighty Hercules".

Popular toys at the moment include the likes of Playpal dolls, Tonka trucks, Troll doll and the Easy-Bake Oven.

If you are looking for some childhood nostalgia, then check out December 25th, 1969 instead.

Singer.
Born on December 25th, 1971
She was born exactly 8 years after this date.

Canadian Prime Minister.
Born on December 25th, 1971
He was born exactly 8 years after this date.

Lyndon Baines Johnson was the President of the United States on December 25th, 1963.

Sir Alec Douglas-Home was the Prime Minister of the United Kingdom on December 25th, 1963.

Enter your date of birth below to find out how old you were on December 25th, 1963.

Here are some fun statistics about December 25th, 1963.