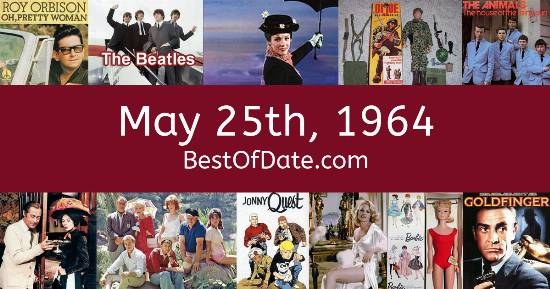 Songs that were on top of the music singles charts in the USA and the United Kingdom on May 25th, 1964:

The date is May 25th, 1964 and it's a Monday. Anyone born today will have the star sign Gemini. The summer of 1964 has finally arrived. The weather has warmed up and the evenings are brighter than usual.

In America, the song Love Me Do by The Beatles is on top of the singles charts. Over in the UK, You're My World by Cilla Black is the number one hit song. Lyndon Baines Johnson is currently the President of the United States and Sir Alec Douglas-Home is the Prime Minister of the United Kingdom.

Because it's 1964, radio stations are playing hit songs from music artists such as The Beatles, Roy Orbison, The Animals, The Supremes and The Beach Boys. In fashion, women are wearing miniskirts and "space age" attire with synthetic materials. The "Dolly Girl" look has also become popular. Meanwhile, men are beginning to transition into "surf rock" fashion, which has been made popular by bands such as The Beach Boys. "Greasers", who are influenced by rock 'n' roll fashion, have also become a popular subculture. On TV, people are watching popular shows such as "The Jack Benny Program", "Gunsmoke", "Wagon Train" and "The Twilight Zone".

Children and teenagers are currently watching television shows such as "The Gumby Show", "The Adventures of Rocky and Bullwinkle and Friends", "The Flintstones" and "Ricochet Rabbit & Droop-a-Long". If you're a kid or a teenager, then you're probably playing with toys such as "Astrobase", "Rock-a-Stack", "Big Loo" and "Army men".

Notable events that occurred around May 25th, 1964:

Celebrities, historical figures and noteable people who were born on the 25th of May:

National holidays and famous events that fall on the 25th of May:

Who was the Prime Minister of the United Kingdom on May 25th, 1964?

Looking for some nostalgia? Here are some Youtube videos relating to May 25th, 1964. Please note that videos are automatically selected by Youtube and that results may vary! Click on the "Load Next Video" button to view the next video in the search playlist. In many cases, you'll find episodes of old TV shows, documentaries, music videos and soap dramas.