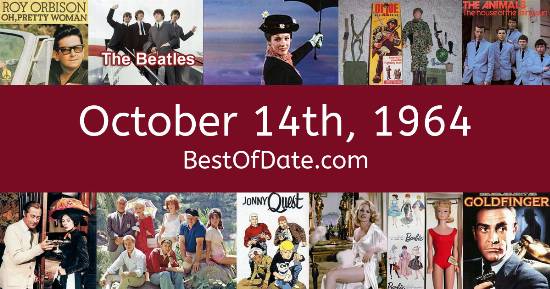 Songs that were on top of the music singles charts in the USA and the United Kingdom on October 14th, 1964.

The date is October 14th, 1964 and it's a Wednesday. Anyone born today will have the star sign Libra. The summer is long gone. Temperatures have started to become much cooler and the evenings are beginning to get darker.

Fallen leaves have carpeted driveways, lawns, pathways and sidewalks and there's a fresh earthy scent in the ear. In America, the song Do Wah Diddy Diddy by Manfred Mann is on top of the singles charts. Over in the UK, Oh Pretty Woman by Roy Orbison is the number one hit song.

Lyndon Baines Johnson is currently the President of the United States and the movie A Shot in the Dark is at the top of the Box Office. In the United Kingdom, Sir Alec Douglas-Home is the current Prime Minister. Because it's 1964, radio stations are playing hit songs from music artists such as The Beatles, Roy Orbison, The Animals, The Supremes and The Beach Boys.

In fashion, women are wearing miniskirts and "space age" attire with synthetic materials. The "Dolly Girl" look has also become popular. Meanwhile, men are beginning to transition into "surf rock" fashion, which has been made popular by bands such as The Beach Boys. "Greasers", who are influenced by rock 'n' roll fashion, have also become a popular subculture. If you were to travel back to this day, notable figures such as Herbert Hoover, Sam Cooke, T. S. Eliot and Winston Churchill would all be still alive. On TV, people are watching popular shows such as "The Ed Sullivan Show", "What's My Line?", "Gunsmoke" and "Perry Mason".

Children and teenagers are currently watching television shows such as "Looney Tunes", "Mighty Mouse Playhouse", "The Bugs Bunny Show" and "Jonny Quest". If you're a kid or a teenager, then you're probably playing with toys such as Crater Critters, Big Loo, Johnny Seven OMA (toy gun) and G.I. Joe: America's Movable Fighting Man.

If you are looking for some childhood nostalgia, then check out October 14th, 1970 instead.

Lyndon Baines Johnson was the President of the United States on October 14th, 1964.

Sir Alec Douglas-Home was the Prime Minister of the United Kingdom on October 14th, 1964.

Enter your date of birth below to find out how old you were on October 14th, 1964.

Here are some fun statistics about October 14th, 1964.