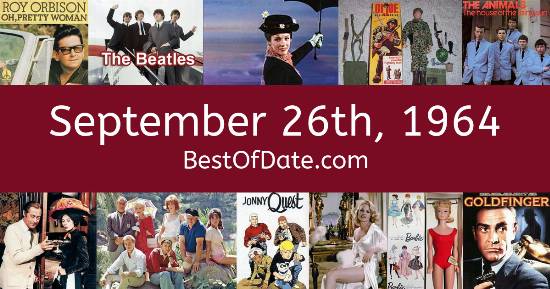 Songs that were on top of the music singles charts in the USA and the United Kingdom on September 26th, 1964:

The date is September 26th, 1964 and it's a Saturday. Anyone born today will have the star sign Libra. Currently, people are enjoying their weekend.

Schools have started back and autumn has arrived, so temperatures have started to cool and trees are beginning to shed their leaves. The earthy smells of fall have started to fill the air. In America, the song Oh Pretty Woman by Roy Orbison is on top of the singles charts.

Over in the UK, I'm Into Something Good by Herman's Hermits is the number one hit song. Lyndon Baines Johnson is currently the President of the United States and Sir Alec Douglas-Home is the Prime Minister of the United Kingdom. Because it's 1964, radio stations are playing hit songs from music artists such as The Beatles, Roy Orbison, The Animals, The Supremes and The Beach Boys.

A new sitcom called "Gilligan's Island" has recently made its TV debut on CBS. The show, which stars Bob Denver, follows the lives of seven people who have become shipwrecked on an island. People are watching popular TV shows such as "Perry Mason", "Rawhide", "The Andy Griffith Show" and "Hazel". Kids and teenagers are watching TV shows such as "Lassie", "Heckle and Jeckle", "The Flintstones" and "Jonny Quest".

If you're a kid or a teenager, then you're probably playing with toys such as "Astrobase", "G.I. Joe: America's Movable Fighting Man", "Rock 'Em Sock 'Em Robots" and "Motorific (slot car toys)".

Celebrities, historical figures and noteable people that were born on the 26th of September:

Who was the Prime Minister of the United Kingdom on September 26th, 1964?

Enter your date of birth below to find out how old you were on September 26th, 1964.

Looking for some nostalgia? Here are some Youtube videos relating to September 26th, 1964. Please note that videos are automatically selected by Youtube and that results may vary! Click on the "Load Next Video" button to view the next video in the search playlist. In many cases, you'll find episodes of old TV shows, documentaries, music videos and soap dramas.

Here are some fun statistics about September 26th, 1964.