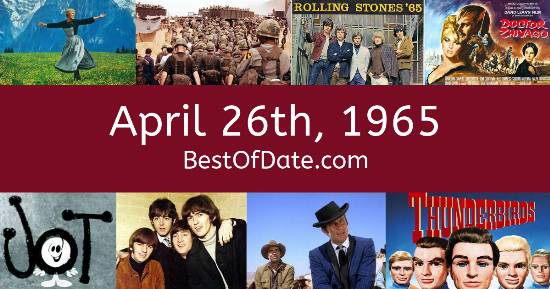 On April 26th, 1965, the following songs were at the top of the music charts in the USA and the UK.

The date is April 26th, 1965, and it's a Monday. Anyone born today will have the star sign Taurus. The summer of 1965 is drawing closer and temperatures have started to rise.

In America, the song Game Of Love by Wayne Fontana is on top of the singles charts. Over in the UK, Ticket To Ride by The Beatles is the number one hit song. Lyndon Baines Johnson is currently the President of the United States, and the movie My Fair Lady is at the top of the Box Office.

If you were to travel back to this day, notable figures such as Walt Disney would be still alive. On TV, people are watching popular shows such as "Rawhide", "Bonanza", "Danger Man" and "Shindig!". Children and teenagers are currently watching television shows such as "Looney Tunes", "Noggin the Nog", "Mister Ed" and "Davey and Goliath".

If you're a kid or a teenager, then you're probably playing with toys such as Metal House robots, Tammy (doll), Big Loo and G.I. Joe: America's Movable Fighting Man.

These are trending news stories and fads that were prevalent at this time. These are topics that would have been in the media on April 26th, 1965.

Check out our personality summary for people who were born on April 26th, 1965.

Television shows that people were watching in April, 1965.

If you are looking for some childhood nostalgia, then you should check out April 26th, 1971, instead.

Celebrities, historical figures, and other notable people who were born on April 26th.

First Lady of the United States.
Born on April 26th, 1970
She was born exactly 5 years after this date.

American musician. Deceased
Born on April 26th, 1975
He was born exactly 10 years after this date.

Lyndon Baines Johnson was the President of the United States on April 26th, 1965.

Enter your date of birth below to find out how old you were on April 26th, 1965.
This information is not transmitted to our server.