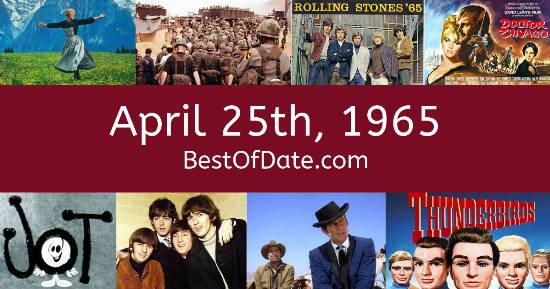 Songs that were on top of the music singles charts in the USA and the United Kingdom on April 25th, 1965.

The date is April 25th, 1965 and it's a Sunday. Anyone born today will have the star sign Taurus. Currently, people are enjoying their weekend.

The summer of 1965 is drawing closer and temperatures have started to rise. In America, the song I'm Telling You Now by Freddie & The Dreamers is on top of the singles charts. Over in the UK, The Minute You're Gone by Cliff Richard is the number one hit song.

On TV, people are watching popular shows such as "The Ed Sullivan Show", "What's My Line?", "The Farmer's Daughter" and "Gilligan's Island". Kids and teenagers are watching TV shows such as "My Three Sons", "The Bugs Bunny Show", "Davey and Goliath" and "The Mighty Hercules". Popular toys at the moment include the likes of Etch A Sketch, Chatter Telephone, Big Loo and G.I. Joe: America's Movable Fighting Man.

If you are looking for some childhood nostalgia, then check out April 25th, 1971 instead.

Lyndon Baines Johnson was the President of the United States on April 25th, 1965.

Harold Wilson was the Prime Minister of the United Kingdom on April 25th, 1965.

Enter your date of birth below to find out how old you were on April 25th, 1965.