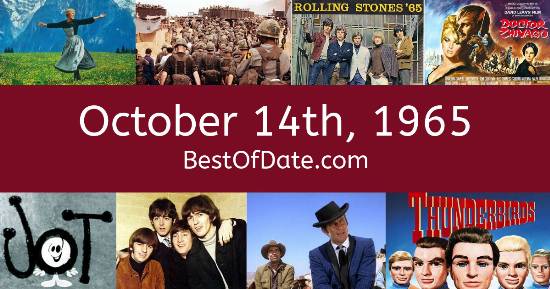 Songs that were on top of the music singles charts in the USA and the United Kingdom on October 14th, 1965.

The date is October 14th, 1965 and it's a Thursday. Anyone born today will have the star sign Libra. The summer is long gone. Temperatures have started to become much cooler and the evenings are beginning to get darker.

Fallen leaves have carpeted driveways, lawns, pathways and sidewalks and there's a fresh earthy scent in the ear. In America, the song Yesterday by The Beatles is on top of the singles charts. Over in the UK, Tears by Ken Dodd is the number one hit song.

Because it's 1965, radio stations are playing hit songs from music artists such as The Rolling Stones, The Byrds, The Beatles, Sonny & Cher and The Supremes. If you were to travel back to this day, notable figures such as Walt Disney would be still alive. On TV, people are watching popular shows such as "What's My Line?", "Rawhide", "Gilligan's Island" and "I Dream of Jeannie".

Children and teenagers are currently watching television shows such as "Tom and Jerry", "Captain Kangaroo", "Underdog" and "Milton the Monster". If you're a kid or a teenager, then you're probably playing with toys such as Troll doll, Tammy (doll), the Easy-Bake Oven and Army men.

If you are looking for some childhood nostalgia, then check out October 14th, 1971 instead.

Lyndon Baines Johnson was the President of the United States on October 14th, 1965.

Harold Wilson was the Prime Minister of the United Kingdom on October 14th, 1965.

Enter your date of birth below to find out how old you were on October 14th, 1965.

Here are some fun statistics about October 14th, 1965.