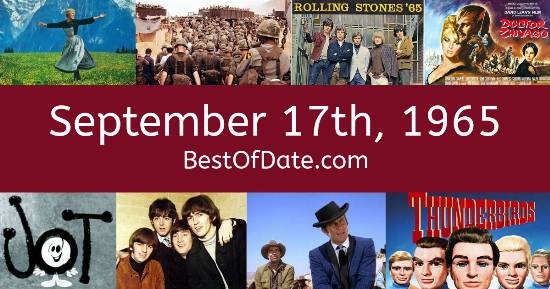 Songs that were on top of the music singles charts in the USA and the United Kingdom on September 17th, 1965.

The date is September 17th, 1965 and it's a Friday. Anyone born today will have the star sign Virgo. Currently, people have "that Friday feeling" and are looking forward to the weekend.

Schools have started back and autumn has arrived, so temperatures have started to cool and trees are beginning to shed their leaves. The earthy smells of fall have started to fill the air. In America, the song Help by The Beatles is on top of the singles charts.

Over in the UK, (I Can't Get No) Satisfaction by The Rolling Stones is the number one hit song. Lyndon Baines Johnson is currently the President of the United States and the movie The Sound of Music is at the top of the Box Office. In the United Kingdom, Harold Wilson is the current Prime Minister.

In fashion, women are wearing miniskirts and "space age" attire with synthetic materials. The "Dolly Girl" look has also become popular. Meanwhile, men are beginning to transition into "surf rock" fashion, which has been made popular by bands such as The Beach Boys. "Greasers", who are influenced by rock 'n' roll fashion, have also become a popular subculture. Because it's 1965, radio stations are playing hit songs from music artists such as The Rolling Stones, The Byrds, The Beatles, Sonny & Cher and The Supremes. A new sitcom called "Hogan's Heroes" has recently made its television debut. The sitcom, which aired on CBS this month, is set in a German prisoner of war camp during WW2.

If you were to travel back to this day, notable figures such as Walt Disney would be still alive. On TV, people are watching popular shows such as "What's My Line?", "Gunsmoke", "Steptoe and Son" and "My Favorite Martian". Children and teenagers are currently watching television shows such as "Looney Tunes", "Heckle and Jeckle", "The Mighty Hercules" and "Hoppity Hooper".

If you are looking for some childhood nostalgia, then check out September 17th, 1971 instead.

The Prodigy member. Deceased
Born on September 17th, 1969
He was born exactly 4 years after this date.

Lyndon Baines Johnson was the President of the United States on September 17th, 1965.

Harold Wilson was the Prime Minister of the United Kingdom on September 17th, 1965.

Enter your date of birth below to find out how old you were on September 17th, 1965.

Here are some fun statistics about September 17th, 1965.